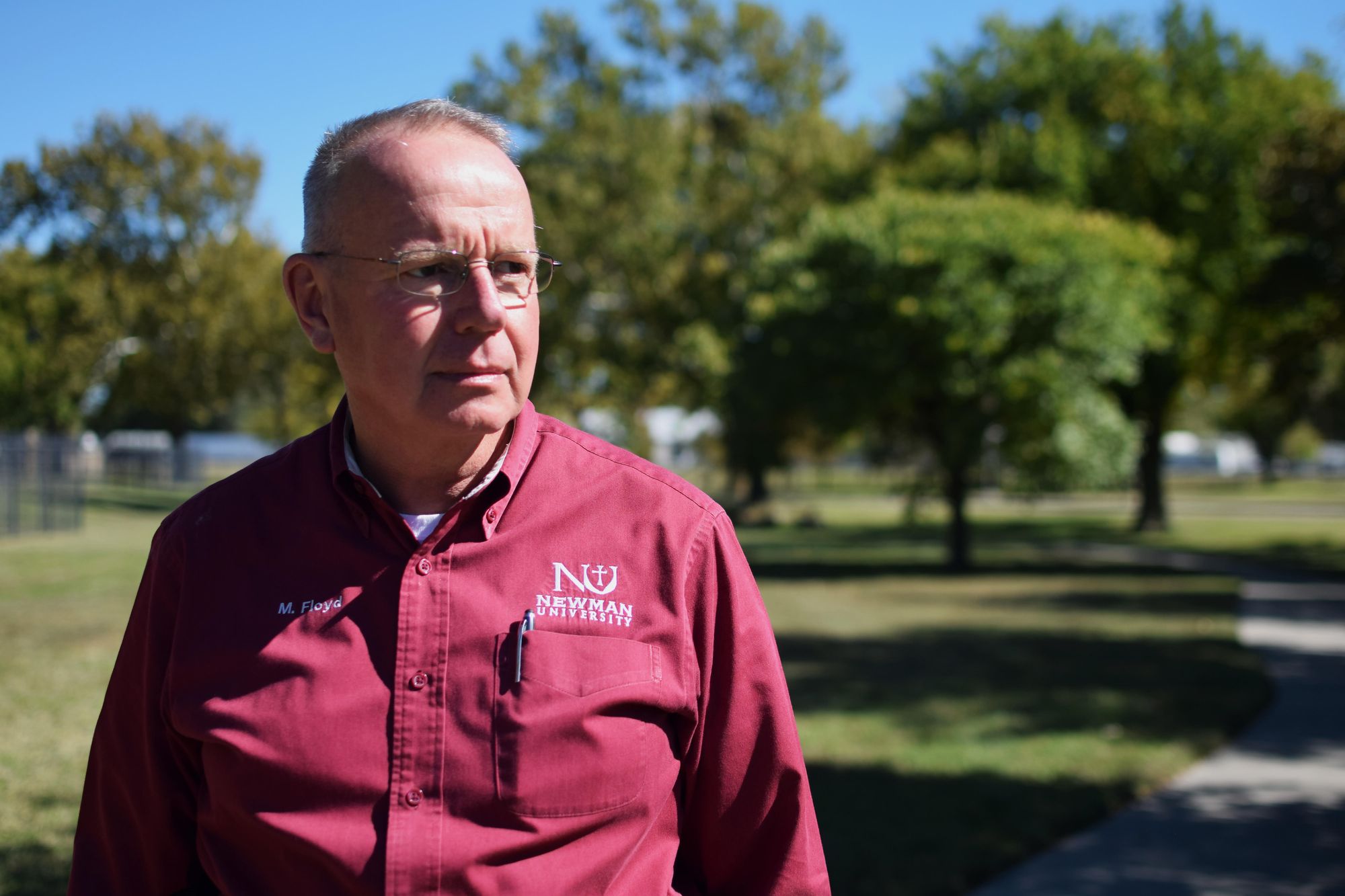 When Director of Security Morris Floyd made a doctor’s visit in September of last year for a hearing issue with his right ear, he received a devastating bit of news that knocked him down pretty hard.

“My doctor sat across from me and he said, ‘Mo, you’ve got a brain tumor,’” Floyd said.

But Floyd said he refused to let the news get the better of him. Instead, he said, “I put my game face on, and I got back up.”

Floyd doesn’t consider himself a “typical director of security.” He said wants to be someone who can provide support, friendship and advice to students.

“I’m not a coach or a professor,” he said. “I can’t teach anything in a classroom. But what I can do is pass along some life lessons I’ve learned.”

The biggest life lesson Floyd said he wants to share is to “always get back up.” This is a mantra he said he’s learned to live by when faced with tragedy.

Floyd calls the three biggest lows in his life his “three Septembers,” where he had to get back up and keep going.

On Sept. 19, 1983, Floyd said, he experienced his first major tragedy when lost his newborn son Kyle while they were several states apart.

Floyd, who was 20 at the time, said he had to go through the heartbreaking experience of flying his baby’s body across the country to be buried, purchasing a headstone, and comforting his grieving wife.

“So now I had to be strong for the both of us, hundreds of miles away… I just had to deal with it. That helped shape who I was a young age,” he said.

In September 2015, Floyd said, he was knocked down again when he learned his youngest son had cancer.

“At the time there were a lot of unknowns. And of course, that September knocked me flat,” he said. “But you have to get back up, and you have to be strong for someone else. You can’t be selfish.”

Floyd said he had to stay strong for his son’s young family. He said it was tough to watch from the sidelines while his son was going through treatments, knowing there was nothing more he could do. Fortunately, he said, the treatments were effective and his son recovered.

After dealing with the first two “Septembers,” Floyd said he knew he was strong enough to deal with the latest one - his brain tumor.

“I knew I couldn’t take this lightly, but I wasn’t going to let it control me either,” he said.

The Newman community, Floyd said, played a big role in helping pull him up from this particular health scare.

“I think the students here are worth everything that I can give them. They are a truly unique bunch of kids, and they make me smile,” he said.

Sometimes, Floyd said, he would walk into a few of the Chorale practices just to listen and ease his mind.

Senior Chorale member Aaron Van Ness said he remembers when Floyd would come to rehearsals and bring snacks for the singers.

“When he’s making his rounds - if he’s in the building at the time - he’d sneak in and listen for a while and sneak out. Sometimes people don’t even notice him, but I always make sure he’s noticed. I always make sure to wave at him.” Van Ness said. “He’s always supportive of choir.”

Floyd said he wants to give back to the students by sharing his experience.

“I take these lessons, and I will talk to individuals to encourage them. I don’t want them to give up because at some point in their life, they’re going to have a September, if they haven’t already, and they’re going to have to get back up,” he said. “This is where they learn. They’re not just book learning here, they’re learning life lessons here. If they can learn something through my encouragement, then I’ve succeeded.”

Floyd said his experience in life is what inspires him to send emails to student athletes telling them not to give up, even if they’re facing a particularly tough season.

Sometimes, Floyd will stand outside in the parking lot and support teams who are going away by giving them a personal send-off as their bus departs. He said he never wants them to forget that there is always someone pulling for them.

On a couple occasions, Floyd said, he’s tried helping students who are going through their own issues by using his circumstance to “let them know they were not alone.”

Van Ness said he appreciates Floyd’s kindness and concern, whether it’s by giving people rides to class or talking to them when they need a friend.

“I like talking to Mo. I always make sure to wave at him, and say ‘Hi.’ He goes out of his way to help me… He’s one of those guys that is sympathetic and empathetic to your needs and will help you whenever he sees the need,” Van Ness said.

Floyd went in for a checkup last month and said he was glad to hear the radiation seemed to work. His tumor remains noncancerous and seems to have decreased in size, but he will have to go in for a check-up every year.

Floyd has lost 80 percent of his hearing in his right ear, and said he will likely never gain that hearing back. Despite this, he said his boss cleared him to do keep doing his job.

“The students here, every single of them, are unique. It is a blessing for me to work here. And I don’t take that lightly, so if I can give something back to the students, that’s what I want to do,” he said.

PHOTO: MORRIS “MO” FLOYD, Newman’s director of security, was diagnosed with a brain tumor last year that cost him most of his hearing in his right ear. Carley Sullivan, Photography Editor

The DisadVantage: Throwing it Back