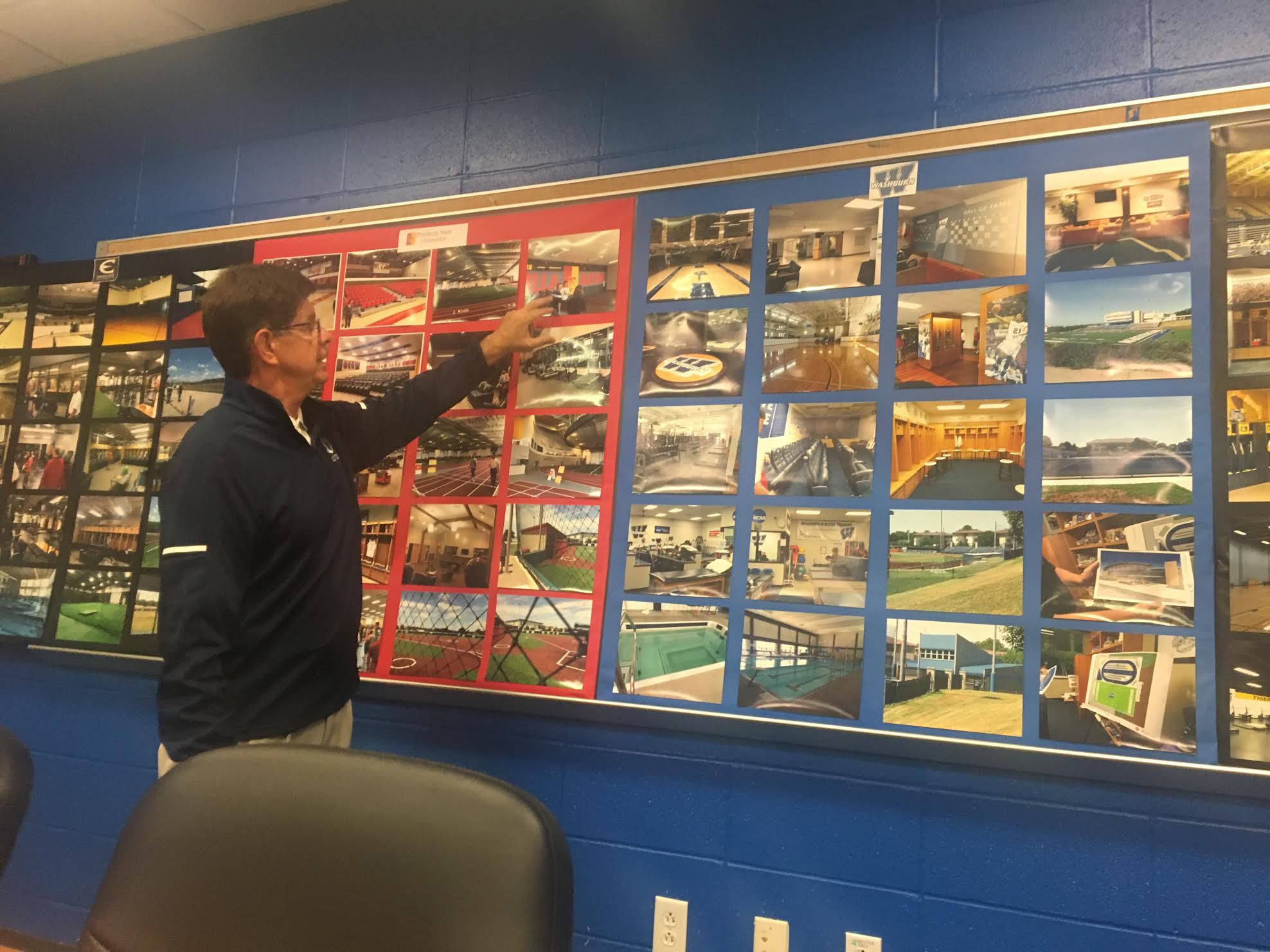 The Athletic Department recently presented it’s aspirations to the President’s Cabinet for new athletic facilities that could become a part of Newman’s next biggest fundraising project since the Bishop Gerber Science Center.

Athletic Director Vic Trilli said “it’s the perfect time” to start looking at how to improve the athletic facilities, given that Newman will be making the transition to a new conference, the Mid-America Intercollegiate Athletics Association, this upcoming year.

Over the summer, a group including coaches, cabinet members, and athletic administration staff traveled to all of the schools in the MIAA athletic conference in the state of Kansas: Fort Hays State University, Washburn University, Pittsburg State University and Emporia State University. While there, they toured the facilities, snapped photos, and made a chart that sits in the Childs Conference room displaying each school’s various athletic features.

Trilli described this process as “the comparing stage,” where the Athletic Department will determine what improvements they want to push for in their new five-year plan by looking at what competing schools have.

“What we need to do is see what we have, see what they have, and from that have a look at what our needs are,” Trilli said.

Trilli said the university master plan had athletic facilities listed as the next big priority after the Bishop Gerber Science Center.

Associate Athletic Director Joanna Pryor said the cabinet requested that they begin the process by formulating a five-year plan that includes the improvements they would like to see.

Pryor said biggest priorities would be indoor facilities for the outdoor sports like baseball, soccer, and cross country; an additional gym so athletes could have a practice gym; turf, so the university can be in compliance for hosting larger tournaments; and a tennis court on campus.

There were some other impressive things the other universities had, Pryor said, but the members of the Athletic Department had to account for Newman’s smaller size and lack of a football team when they did their comparisons.

“You have to dial it down and think, ‘What do we need here for us?’ We did get some great ideas from some of the things that they had,” Pryor said. “We think that Fort Hays has a really good facility that we could mirror… It’s a metal building with turf inside and a weight room.”

Pryor said the strategic plan she presented for the cabinet did not just include goals for new facilities, but for the student-athlete experience, engaging the alumni, and governance and structure.

Pryor said the Athletic Department’s proposed strategic plan for the big fundraising project is not complete yet because it has yet to be implemented into the strategic plan for the university as a whole, which lasts for three years. Additionally, she said, the university has to meet with its top donors to determine how much money it will be able to raise for the projects.

The new facilities they are asking for right now, she said, may not come into fruition for a while, and she cannot give a timeline for now.

In the meantime, Trilli said, the department is still working to make smaller individual improvements on an annual basis, the most recent of which will be the installation of new seating at the baseball field taken from the Lawrence-Dumont Stadium.

“We just got them last week… and they’re red, a great Newman color,” he said.

PHOTO: ATHLETIC DIRECTOR VIC Trilli looks at a series of photos from MIAA schools and points to one of Pittburg State’s facilities. Courtney Klaus, Editor-In-Chief

A changing paper, an enduring impact.