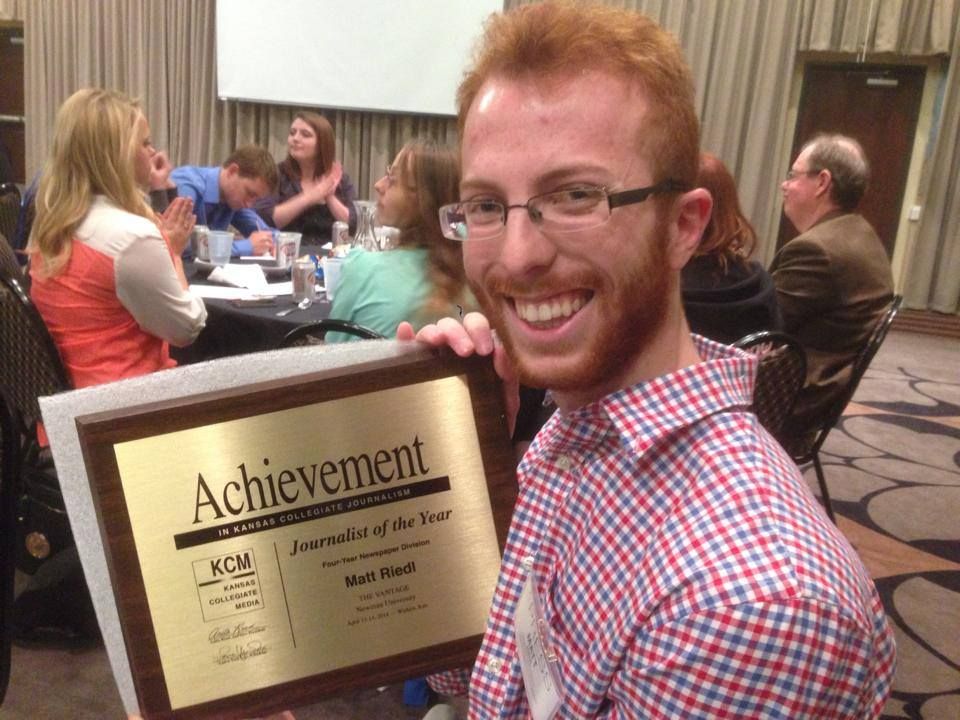 Trust me: Though it may not always seem like it, there’s a big world out there beyond the walls and halls of 3100 McCormick Ave.

But don’t worry – you can do a lot at Newman University to prepare yourself to thrive in that world while you’re still a student.

The university likes to talk about how students in its (admittedly impressive) pre-med program often earn spots in regional medical schools.

But I’m here to tell you that The Vantage, this very confection of paper and ink you hold in your hands, prepared me for a job in journalism straight out of college.

It all started my freshman year, when a fresh-faced Matt walked into an Intro to Journalism class in De Mattias Hall. Tecnically, I’d already been “introduced” to journalism years before, in high school, but I was interested in getting involved at Newman.

Soon, The Vantage’s adviser, Denise Neil, had me writing all sorts of stuff for the paper – from opinion columns about my undying love for honey mustard to news stories about drama in the Theatre Department.

My junior year, I became editor-in-chief of the paper and found myself in a pickle.

The Vantage’s account with the university was significantly overdrawn from past mismanagement, and I had to get us back in the black – or else.

Though we dealt with steep budget cuts that year, the quality of our coverage went way up.

The summer before, I redesigned the paper to look the way it does now on a weekly basis – you don’t want to see what it looked like before. Clunky, clunky, clunky.

That year, we covered things The Vantage hadn’t covered in a long time. We scanned through public records and police reports to get a better idea of what’s actually happening on campus, reporting on things that had been kept hush-hush in the past.

It was for that reason – improving coverage while budget-cutting – that I was named the Kansas Collegiate Media Journalist of the Year in 2014. It was (and remains) the only time in the history of the award that a journalist not from Wichita State won that honor.

I’m most proud of the fact, though, that The Vantage has seemingly maintained that commitment to investigative journalism in the years following my graduation in 2015. I like to think of it as a torch that’s passed down from editor to editor.

I handed my torch to Kati Bush and John Denny, who passed the torch to Delaney Hiegert, who passed it on to its current editor Courtney Klaus.

While I was working at The Vantage during the school year, I interned at The Wichita Eagle on a regular basis over summer and winter breaks.

At first I wasn’t paid for my work there, but by my junior year at Newman, I was paid for my reporting and I was a regular freelancer for the paper.

During my junior year, I freelanced an entire 40-something-page special section for the Eagle the week before finals. Probably not the smartest move in hindsight, but the paycheck was a nice reward.

Long story short, because of my past work with The Eagle and the quality of my work with The Vantage, The Eagle called me mid-way through my senior year and offered me a full-time position at the paper. No interview or anything like that – they just flat-out offered it.

There I’ve been ever since, though I don’t report the night-shift crime news that I was hired on to do anymore.

I don’t know how long I’ll be in this industry, but I can tell you one thing: Writing for The Vantage was one of the most rewarding collegiate experiences I had.

When I think of Newman, I think of two things: Singing with the Chorale and writing for The Vantage.

It helped me become a professional journalist, and it can help you do the same.

Just give it a try.

You never know where a column about “honey musty” may take you.