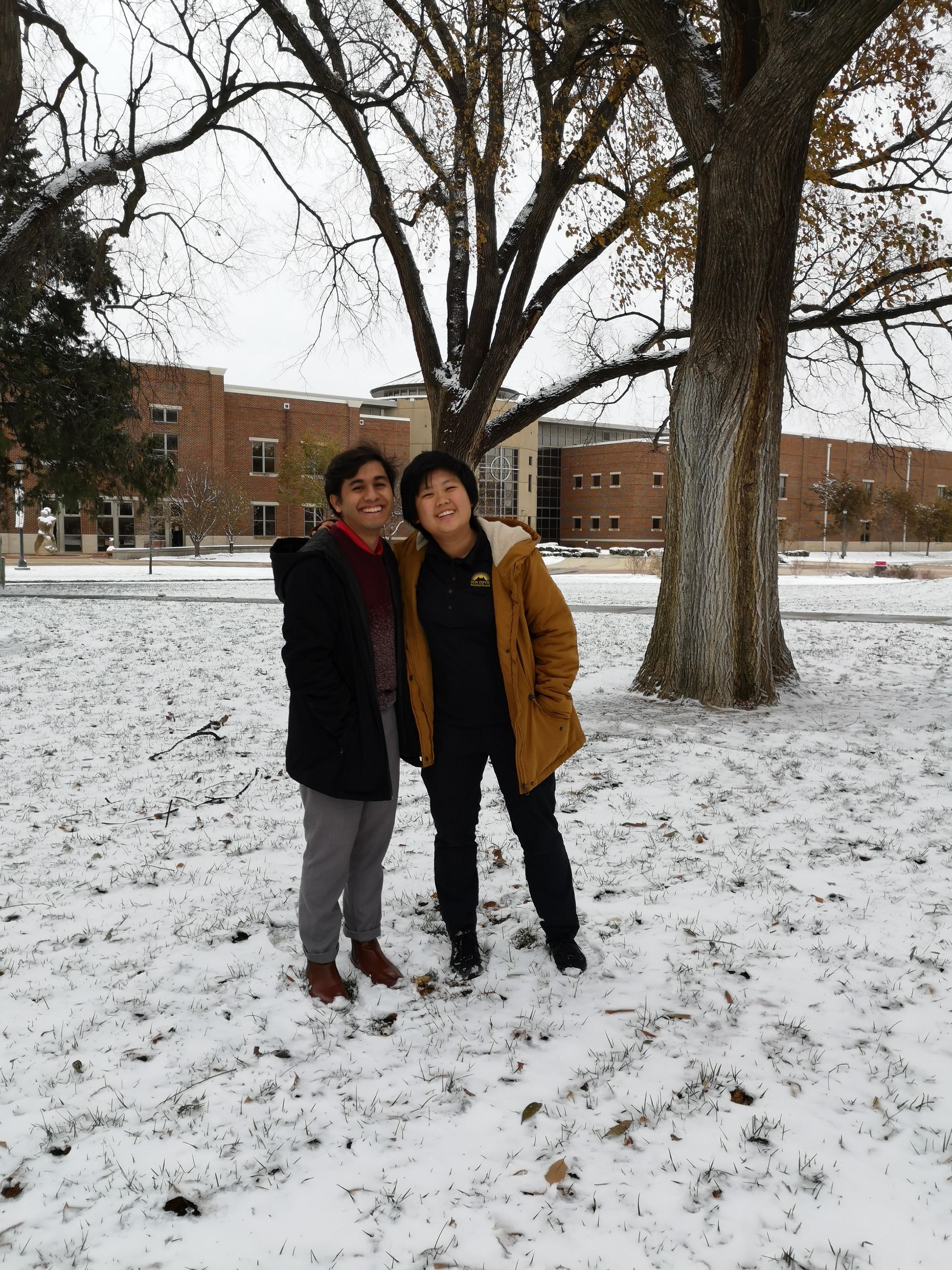 Students come to Newman University from all across world, allowing them to experience the new atmosphere of not only college, but also perhaps a new region entirely.

Being located in Kansas, students have the pleasure of sampling almost any weather condition imaginable.

As the temperature drops and the peppermint mochas return, students share stories of their first encounters with snow.

Kristin Lau, a junior from Malaysia, said she has rather joyous and comical stories regarding her first experiences with snow. Before coming to Kansas, Lau’s only experience with snow involved an event that used imitation snow.

“Back home we have a place called ‘Winter World’ and it’s literally crushed ice, like what you guys have in QuikTrip, and they throw it off the top and it’s so painful.”

It was cold and icy when Lau arrived in Kansas, so she was quickly met by ice and snow.

“The moment I flew down [to] the airport, my friend drove me back to Newman and she said, ‘Be careful, it’s slippery,’ and I stepped on it and immediately I fell, then did that twice in a row.”

Lau’s initial reaction to true snow was a flurry of thoughts, “It’s snow, and it looks like the movies! It was so soft, and then it melts when it touches you. It was magical.”

Beyond the small patches of ice and snow itself, Lau was also incredibly amused by lakes during the winter.

“I also went to the Sisters’ house one time when it was really cold last year, and when their lake froze over, me, Beeter, and her brother went and walked on the edges of the lake. We thought the geese were levitating on the water, then we noticed it was ice, and we screamed, ran there, and started jumping on it.”

Jose Rojas-Montero, another junior, also treasures his memories of first encounters with snow.

“I’m from Venezuela so we don’t have snow there, it only gets hot and hotter. The first time that I ever saw snowfall was last semester. I was actually in a meeting for my job. They stopped the meeting because everyone knew that I have never seen snow, so they were like, ‘Jose, get out of here and go see the snowfall.’ Then, they waited for me to come back after I saw the snow.”

Montero expresses positive feelings relating to snow because of memorable moments and the atmosphere itself.

“I think snow is super peaceful and there’s just something about it that reminds me of my childhood; although we did not have snow, we used to come to Disney World and every December they’d have fake snow at the park, so it reminds me of that.”

Leanne Vastbinder, a sophomore from Florida, saw her first snow when she was traveling with the bowling team.

“I was in Illinois for a bowling tournament, and it hadn’t been snowing when we first got there, but we had bowled two games and we were moving to another lane to start the third game, and my coach came up to me really excited. He was like ‘Leanne, you need to go outside,’ and I was like, ‘Why?’ and he was like, ‘You need to go outside and see what’s out there,’ and I was like ‘What? Okay.’ I just took off my bowling shoes and I went out there in my socks, and I saw snow fall from the sky for the first time and it was just really exciting, and it was very pleasant and fluffy lil’ snowflakes, it was just really cool.”

PHOTO: TWO FOREIGN STUDENTS, along with many other students, have experienced snow for the first time while at Newman. Courtesy photo, Martina Viale

Basketball team hoping for a rebound after rough start