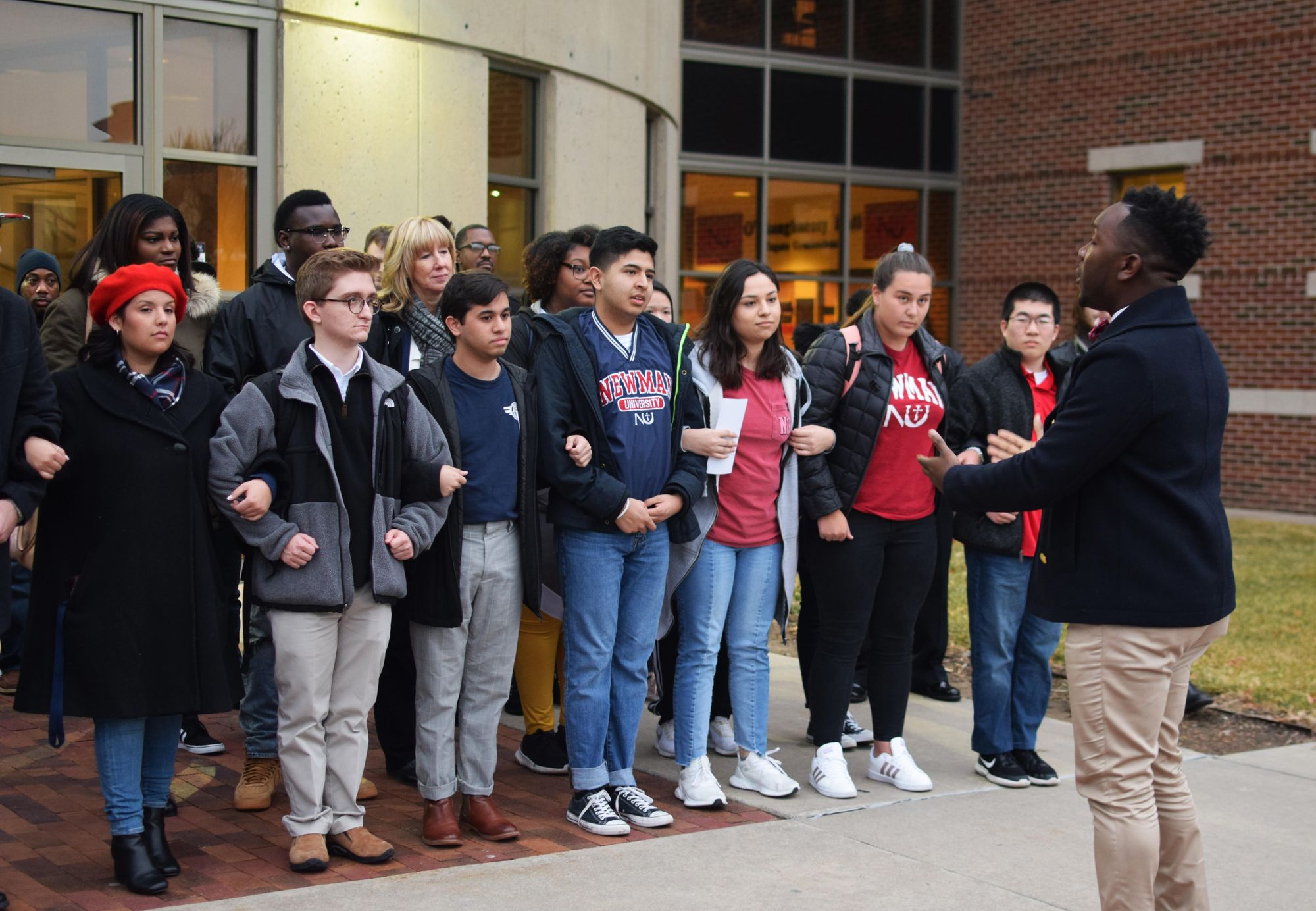 The on-campus celebration and march started with an assembly of nearly fifty in the De Mattias Atrium and reached St. John’s Chapel followed by a commemoration of Dr. King.

In addition to Newman students and faculty being encouraged to participate, the event was open to the greater Wichita area which included groups such as Alpha Phi Alpha Fraternity Inc., Alpha Kappa Alpha Sorority Inc., NU Student Government Association, NU Diversity Round Table and more.

Following the initial prayer, led by Diversity Round Table Ambassador Jordan Ojile, there was a moment of silence and a reflection by Director of Multicultural Engagement and Campus Life, Joseph Shepard.

Shepard said the event was an important way of “celebrating diversity, equity and inclusion.”

“People have been very willing to collaborate and work with me to bring forth more things that really create spaces for students to be their authentic selves and celebrate their culture.”

The event also included a performance by sophomore Keean Bush of “Hallelujah,” words of inspiration from Student Government Association President Marisa Zayat and a recitation of Dr. King’s “I’ve Been To the Mountaintop” speech by Diversity Round Table Ambassador Olivia Camarena.

Students and faculty were also invited to talk about the impact King’s life and legacy had on their lives.

“I’m not from the states, but growing up [...] you hear about Martin Luther King (Jr.) and his story, and it’s just an inspiring story of standing up for what needs to be said and what’s wrong at the moment,” said Diversity Round Table Ambassador, Jose Rojas-Montero,who grew up in Venezuela.

Shepard also spoke and said that King’s story inspired him “to be a champion for change, and to be a catalyst for change as well.”

The event concluded with the presentation of the Dr. MLK Distinguished Service Award, a new award created by the university to recognize faculty and staff administrators living out the values of Dr. King in their work. Each nominee was recognized by a reading of their nominations and the award was ultimately received by HR Employment Specialist, Lisa Deloach.

Closing remarks were given by Dean of Students Christine Schneikart-Luebbe.

Campus was closed on Monday in further honor of the holiday.

A “liberal” Catholic School in a conservative diocese

Coach Farquhar tees up for retirement