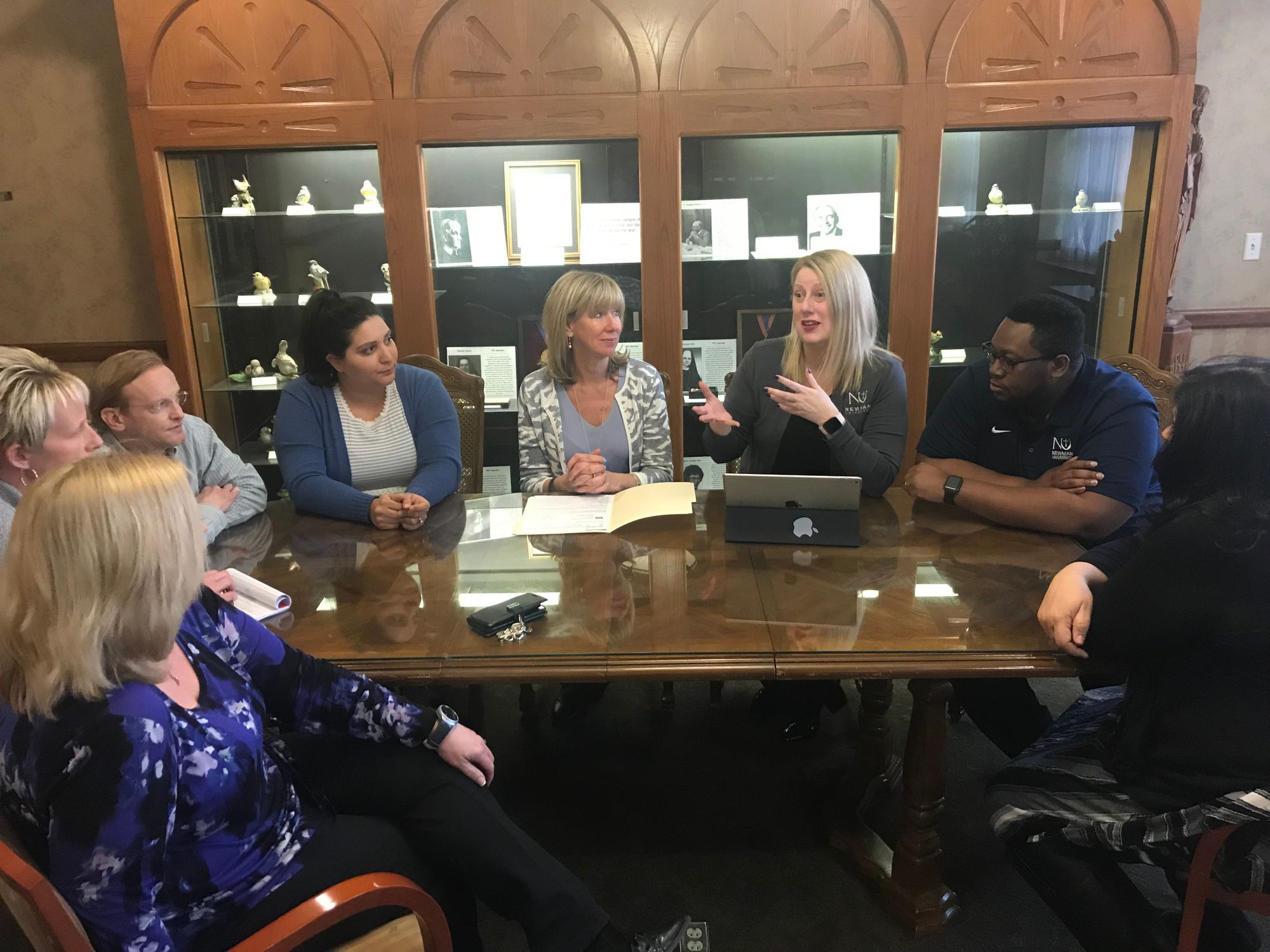 Cammie Kennedy, the university’s director of undergraduate admissions since July, is already making an impact and is “absolutely loving” her time here.

Newman is apparently loving her too because last month, Kennedy was awarded the 2019 Dr. Suzanne Berg SHEro of Excellence Award.

This award, named after the late Dr. Suzanne Berg, celebrates women on campus and their contributions to the university.

Kennedy said she was shocked and honored to be nominated and to receive the award.

Before coming to Newman, Kennedy was employed at a larger institution but wanted to work at a smaller public or private institution instead, she said.

During the interview process, Kennedy said, she took notice of the family atmosphere that Newman had.

“When I came to Newman and met the staff here, I felt very at home,” she said.

During her time here, Kennedy said, she has formed close relationships with her admissions team, who together care about the university and the well-being of students.

“Just to be able to have a team that is all on the same page and has the same goals, it means so much to me. I feel like I am at home. It’s my family,” she said.

Kennedy said among the goals she and her team share is remembering their reason for being here, the students.

Along with the close relationships she has formed with colleagues, Kennedy said she has gotten to know and work closely with many students and student organizations on campus as well.

Some of which are HALO, the Black Student Union and Kaleidoscope, she said.

Sydney Triggs, secretary of the Black Student Union, said that Kennedy has been a huge supporter of her club and that she has been able to build a great relationship with Kennedy.

When thinking about who she thought would be deserving of the Suzanne Berg SHEro of Excellence Award, Triggs said she immediately thought of Kennedy.

“Her charisma draws people into her warm spirit and fun attitude, but her wisdom and genuine devotion to her students anchors you there. She’s committed to help her students reach the stars however they see fit, and it’s great to know there’s a cheerleader in your corner 100 percent,” Triggs said.

Kennedy said she wants students to know that her door is always open to those who may be struggling and need someone to talk to.

Her office is a safe place for students to go if they have feel the need to have those hard conversations and snacks are always available for students, Kennedy said.

“My office is a safe zone office, meaning that if you are struggling with something and need to talk to someone, my office is open for any discussion,” she said.

The students are what makes her job worth everything, Kennedy said.

“Whatever happens, it’s all about remembering that we are here for, the students, and everything we do is for them. That makes me happy,” she said.