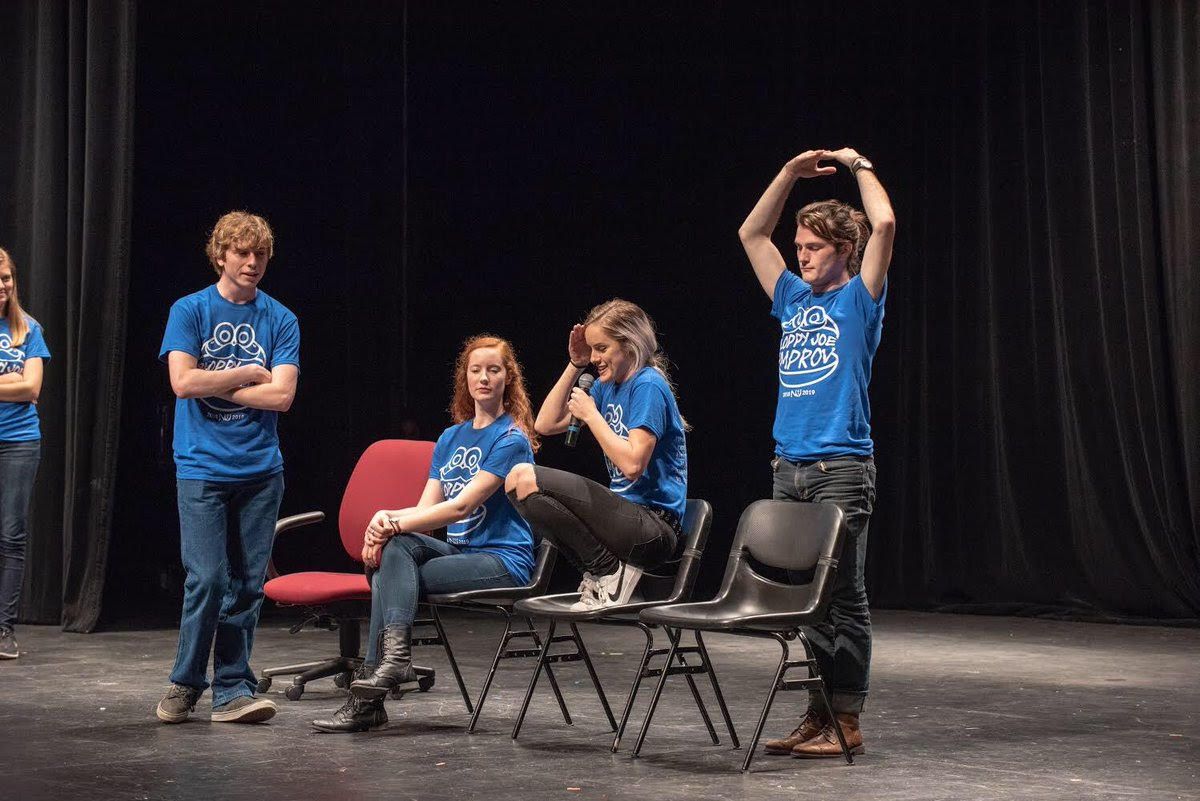 Sophomores Daniel Knolla and Marie Moore will join eight veterans to round out the 2019-2020 team of improv actors, who regularly put on shows on campus and elsewhere. Auditions were held at 6 p.m. on Aug. 29 in Jabara Black Box Theatre. Ten people tried out for the two open spots.

Senior co-captain Lucas Farney said the team wanted to get started right away so it was looking for new members who could be adaptable.

“Last year we had five empty slots. All five of the people that we chose were freshmen so it took most of the year to really help them adjust and to help create a team atmosphere,” Farney said. “Now that there are already eight of us returning and only two new people, we can dive right in.”

Sophomore co-captain Brenden Schwartz said he agreed that Knolla and Moore stood out among the candidates.

“We felt that Dan and Marie had the most innate natural talent and that there wouldn’t be much training that we had to put them through and that we could take off running with them and get a good year going,” Schwartz said.

Moore, who majors in biology, was looking for a way to let her creative energy out.

“I wanted to try out because I feel that I am a fairly outgoing and rambunctious person,” she said. “I really wanted to have an outlet for my artistic side, so I thought improv would be the perfect fit for me.”

Knolla, who has no prior experience in improv, said he had similar reasons for auditioning.

“I wanted to do something on campus that was fun, active, and engaged my creative side. I’m a biochem major, so I don’t get to do that often,” he said. “Also, the Sloppy Joes are all super cool people and they’re fun to hang with.”

Farney said it was both Moore’s and Knolla’s abilities to naturally take direction that gave them an edge above other hopefuls.

“The number one rule of improv is don’t say no. Dan and Marie perfectly exemplify that,” Farney said. “During the auditions, Brendan came into one of the games that Dan was in and completely changed it up and made him do something different, and [Dan] ran with it and it was even better than what they were doing before.”

With so many people who are heavily involved on campus in one place, the Sloppy Joes traditionally practice late at night. Knolla said late night rehearsals are what he is most excited for.

“[It is] something that’ll make me end my day surrounded by friends and with a big smile on my face,” he said.

Moore said she is most excited to work with all of the returning Sloppys along with Knolla.

“It's already starting to feel like a family to me,” she said.

The Sloppy Joes will have their first standalone performance at 7 p.m. on Sept. 27 in the Jabara Black Box Theatre.

Why I chose Newman, and my first impressions as a transfer