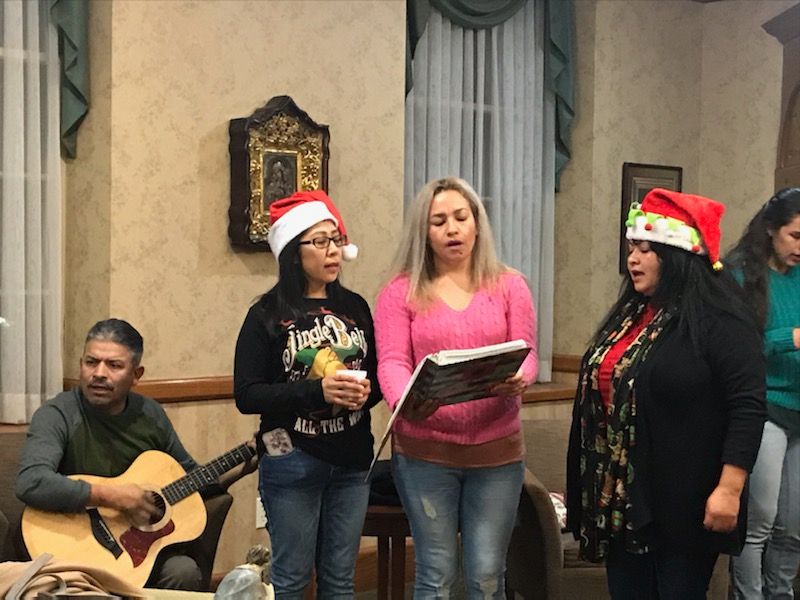 The Hispanic-American Leadership Organization and Campus Ministry teamed up Wednesday evening to host Las Posadas, a traditional celebration in Hispanic culture of Mary and Joseph finding room in the stable at Bethlehem.

Las Posadas is a tradition in Mexico where people knock on neighbors’ doors and sing a call and response, Campus Minister Marie O’Neal said.

“It’s reenacting Mary and Joseph searching for refuge, and at each of the houses, they get turned away and get told to go somewhere else…” she said. “And then on the last house…they’re welcomed in. But it also is a congregation of friends, and so I think on each night that Posadas is celebrated, they have a party as a community just with food and fellowship.”

“We thought it would be a great way to enter into the Advent season and to bring a different experience into Campus Ministry and into Newman,” she said.

President of HALO Stephania Lopez said that she hopes to start a new tradition at Newman.

“I remember when I was a child, I lived in California, and we would walk miles… singing and people would have food and candles and we went to local houses... and we don’t see that in Kansas anymore, so we wanted to bring it to Newman and show everybody what Posadas are and how we can commemorate Joseph and Mary’s journey from Nazareth to Bethlehem with these traditional Mexican carols,” Lopez said.

Lopez said her mother and the choir from St. Margaret Mary Church led the event in song.

Las Posadas started in the chapel with a prayer by University Chaplain Father Adam Grelinger. A group led by the choir traveled throughout Sacred Heart Hall, knocking on classroom doors. Some choir members were stationed inside the classrooms. The group was turned away from each door it knocked on until it got to the Heritage Room, where it was welcomed in and served hot chocolate and pan dulce.

Usually, there is a designated Mary and Joseph in Las Posadas, but Lopez said they used figurines instead during the event at Newman.

O’Neal said she had never participated in Las Posadas before.