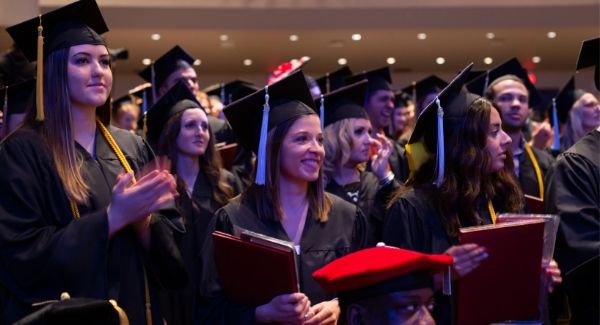 Graduation 2020 has a different time, venue

The years of the Newman’s graduating classes and their families packing into Central Community Church for graduation are coming to an end.

Newman University’s commencement committee is making some key changes to this year’s commencement ceremony by switching venues, moving graduation to a Friday and combining both the undergraduate and graduate ceremonies.

Graduation is moving to Hartman Arena, which will seat 4200 -  roughly a 1000 seat increase from Central Community.

“Last year, a Central Community security guard told us we were 500 to 600 people over capacity in the venue,” committee member Scott Mudloff said. “The way our class sizes are trending, were only going to keep getting bigger.”

Hartman Arena is in Park City, 11 miles further away from Newman than the old venue which was within just a couple miles from the university.

One student doesn’t like the location change. Senior Austin Rieth brings up an issue that other graduating students may be able to relate to.

“It is farther away from Newman… So everyone that doesn’t have a form of transport from the university might struggle getting there. They may even have to end up paying for an Uber just to get to their graduation,” he said.

But in Mudloff’s eyes, change was inevitable.

“We needed a new venue… At the old venue, the day was a 12-hour day’s worth of work for the staff members who were involved,” Mudloff said. “Two ceremonies a day was just too taxing on too many people, and the size issues at the venue is what really precipitated the change.”

Mudloff said he also thinks the larger venue will help make graduation feel like a bigger event than before.

“We are finally treating commencement the way it needs to be treated...After all, the goal for students is to graduate. So, we should make this the biggest day of the year, so let’s move to a bigger venue,” Mudloff said.

The Baccalaureate Mass will now take place  at 6 p.m. on May 7 at the Cathedral of the Immaculate Conception, followed by the President’s Reception, with Bishop Carl Kemme in attendance. Commencement starts at 3 p.m. on May 8 at Hartman Arena.