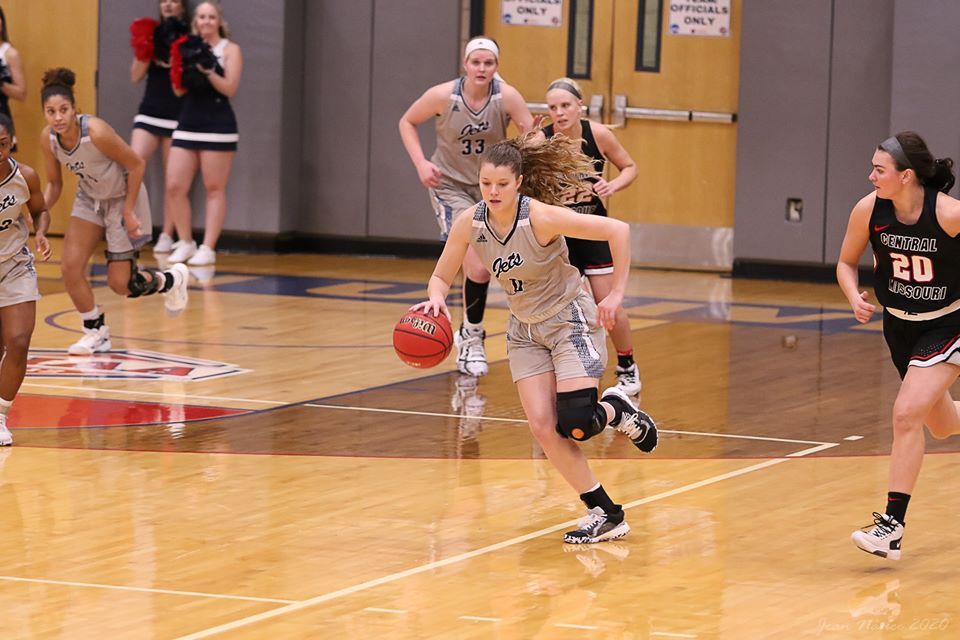 The Lady Jets are 9-11 after loss to Washburn

After a recent loss to Washburn University, the women’s basketball team is holding a record of 9-11 this season, with a 4-7 record in conference play. They are sitting in eighth place among the 14 teams in the MIAA conference.

Women’s head coach Darin Spence said the team is facing new challenges this year in both programs and atmospheres due to the new conference.

“These teams have been at a higher level for longer stretches. They also have pep bands, huge cheer squads, and a thousand plus people and a handful of them have national championships to their program’s credit. It’s a whole different ball game,” Spence said.

Despite the challenges, Spence said, his team is still capable of contending with the best teams in the conference.

“We’ve got a good group. It’s just a matter of being more consistent, and that communication part is going to be key to us,” Spence said.

Junior Haley Albers echoed the sentiments of her coach regarding the importance of communication on the team.

“When we’re communicating, we’re really good. Sometimes, when things go against us, we start to get quiet, so I think consistency in our communication is a big focus,” Albers said.

Even though the competition has been fiercer than expected, Albers said she believes her team has the drive and ability to contend with the best teams.

“We just have to take it one day, one game at a time, knowing that we’re capable of winning every time we step on the court,” Albers said.

Spence said he is hopeful for the potential of this team.

“As they are nearing the end of their season, I’m always encouraged and excited about seeing what this group can grow into. We have enough talent, we’re starting to get into some of the better teams and I’m optimistic that we can beat anybody on our schedule, if we just keep having more ownership in what we’re doing and our players keep investing to get better, and falling in love with the process of getting better,” Spence said.

Ultimately, Spence said, he would love to see more Newman students and faculty attend the games. He said the people at Newman would be shocked to see the kind of support and attendance for the other teams they travel to play.

“If only they would only see what we go to on the road,” Spence said. “Their pep bands are huge, and they heckle: crazy fun things that college basketball should be.”

The lady Jets have eight more games until the end-of-season MIAA tournament. They must stay within the top 10 teams to qualify. They will take on Northwest Missouri State University at 5:30 p.m. on Friday in the Fugate Gymnasium.