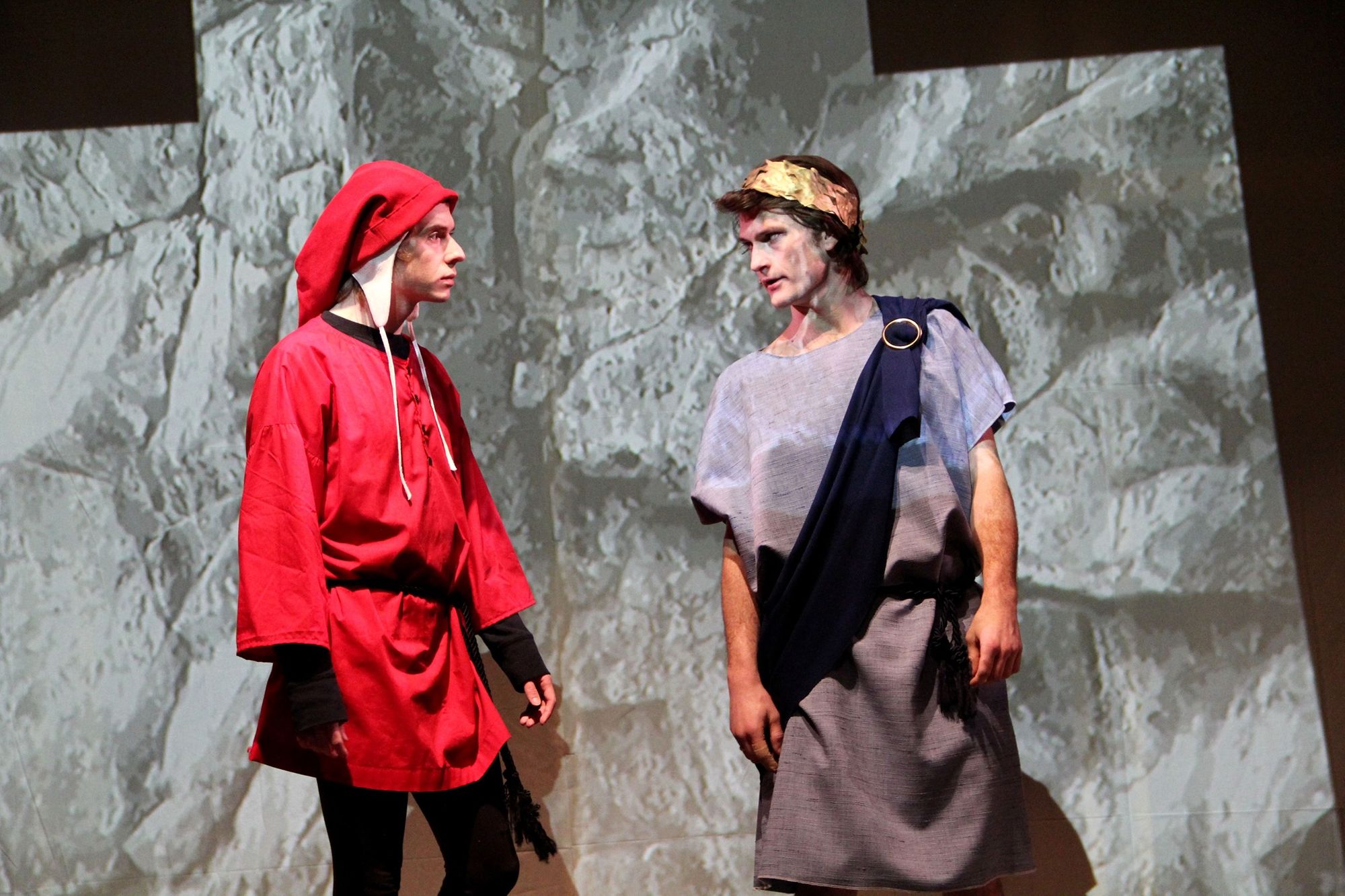 A fiery panel of literary displays

Students, staff and Newman guests went to hell and back this past week with the 21st Annual Lit Fest, centered on an original production of “Dante’s Inferno,” written, produced and directed by Theatre Professor Mark Mannette.

Following the Thursday night showing of “Dante’s Inferno,” actors took part in a Q&A about the show. Sophomore Matthew Clark, who played Dante, the main character of the play, shared how he prepared for the show. Most of his prepwork involved reading other works by Dante, he said.

“I did a bit more historical research because I was trying to find the mind of Dante as the poet, and less Dante the pilgrim,” he said.

Senior Lucas Farney, who played Virgil, a companion and guide for Dante, shared how he memorized his lines for his three hours of stage time. Most of his lines were memorized while building the set. His main motivation was trying to be done before Clark, he said.

“I felt like there was a competition… Anytime I heard he was ahead of me, I would jump to memorizing,” Farney said.

Sophomore Allison Williams shared what it was like to be in “Dante’s Inferno.”

“I love the show…but coming to hell every night can do a little bit to your mind and your attitude and your mood in general. A lot of it was learning how to bounce back from that...Even though it’s not real, you’re still going through it,” she said.

The show featured complicated costumes, such as centaurs with working hind legs, a soundscape designed by senior Aidan Mannette and a projected backdrop that actors interacted with, combining CGI and pre-filmed segments for larger-than-life characters like giants and dragons. The stage itself was designed to be changeable in seconds for the different circles of hell and offered several avenues for the actors playing hell’s punished denizens to move off and on the stage. Overall, the complicated technical effects added up for a terrifyingly good representation of hell as Dante imagined it.

Jumpa shared how often her and her mother’s experiences with being Dominican were reflected in the novel they read together, “En el tiempo de las mariposas,” which focuses on the Mirabel sisters and their life under the dictator Rafael Trujillo in the Dominican Republic.

“Going back on our family story is really difficult,” Jumpa said. “Certain grandparents refuse to talk about that time. We lost a lot of family members….But it was super fun, because there were a lot of times we could relate to the sisters. Even in suffering, they were laughing.”

Open Mic followed as a precursor to Newman’s literary magazine, “Coelacanth.” Students including sophomores Madeline Alvarez and Steven Nguyen shared prose and poetry pieces they had written, in addition to poems shared by “Coelacanth” editors Murphy Obershaw and Bri Southworth.

In the keynote for the event, Mannette shared the historical context for Dante to write the whole of “The Divine Comedy,” of which “Inferno” is only a part. He also discussed his own personal connection to the medieval Italian poet, including walking the same streets that Dante walked after he was exiled from Italian politics.

“I feel like I’m a bit of an exile myself,” Mannette said, “because I’m not in my homeland. I was born in Portland, Maine. A piece of my heart will be in my home…I’ve lived in 13 states, so I’ve had my own parallel exile to Dante…While I’m not exiled, I feel disconnected from my homeland.”

Dr. Bryan Dietrich, Professor of English, shared parts of his recent poetry book, “The Demeter Diaries,” co-written with Marge Simon, where Dracula communicates with his new love and victim Mina Harker. The book loosely follows the events of Dracula. “Diaries” has been nominated as a finalist for the 2019 Bram Stoker Award, an award given by the Horror Writers Association for superior achievement.

The penultimate event of Lit Fest was a panel made up of students taking courses on British Literature and Chaucer’s “Canterbury Tales.” The students drew connections between Dante’s near-contemporary Chaucer and T.S. Eliot’s 1922 poem, “The Waste Land.”

The day closed with a panel made up of theology professors Joshua Papsdorf, Matthew Umbarger, Dusty Gates and lecturer at the Spiritual Life Center Howard Clark. The panel tackled issues like Dante’s vision of hell and its differences from the modern Catholic understanding of hell. The panel also discussed how even the flawed “Inferno” can be a reminder for anyone, Christian or not, to think about what comes after death and potential consequences to how one lives their life.