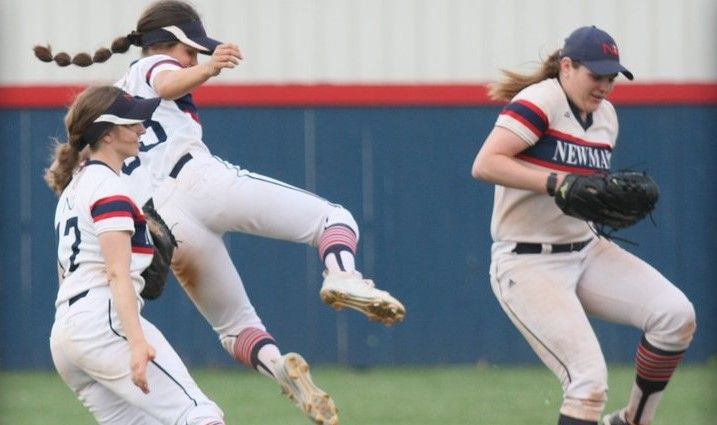 Less than three weeks ago, senior Jets softball player Lacey Colvin was practicing fielding with her teammates in Wichita for their next game against Missouri Southern State University.

Today, she sits behind her computer screen at 6 a.m. at home with her family in Arizona to take her now online Newman Studies Program class.

Colvin’s senior softball season was over before it truly began, thanks to the coronavirus pandemic that has shaken the world and put a halt to just about every athletic competition, from middle school basketball championships to the 2020 Summer Olympics.

On March 12, the National Collegiate Athletics Association announced it would be cancelling the remainder of its spring sports seasons.

Colvin will not get to complete her season as she had hoped, nor will she get to celebrate senior night with her peers or walk across the stage when she graduates from Newman in May.

“It was really hard to let go of the sport… I know it wasn’t like I wasn’t going to eventually move on later in May, but it didn’t end on my terms. It all escalated so fast, and I didn’t get that closure,” she said. “I didn’t get to have my time in Kansas with all the things I’ve come to know and love. I wasn't ready to go home. I wanted to say goodbye to Newman. I wanted to say goodbye to Kansas.”

The NCAA will allow student athletes in spring sports to have an extra year of eligibility to compete, but for seniors like Colvin, who was ready to graduate and move across the country afterward, to do so just is not feasible.

“There’s probably a handful or two that are considering it, but they might have jobs lined up, so they’re having to make those tough decisions now. I encourage them to take their time,” Athletic Director Joanna Pryor said. “And we are still trying to figure out what that looks like as far as scholarship goes.”

Senior international students, like senior tennis player Elizaveta Gerasimova, may also have to leave Newman, even if they elect to use their extra year of eligibility.

When Gerasimova first found out Newman would be extending its spring break because of the COVID-19 outbreak, she said she was excited, until she got the heartbreaking news shortly after that she had officially competed in her last tennis match as a Jet.

“At first I was excited because I thought, ‘Oh finally I get a little break.’ Then three days later I was crying because it was all over,” she said.

Gerasimova, an international student from Russia, will be completing her business degree in the spring of 2020. She says she wants to use her extra year to compete while studying for a master’s degree. Newman’s current master’s program does not meet the requirement for her to retain her student visa status, so she says she will likely move out of state.

“It’s crazy...I used to prefer practicing by myself, you know?...But now I miss my teammates and I miss practicing with them. This is very sad,” Gerasimova said.

The NCAA will not, however, extend the same extended eligibility offer to athletes in winter sports, despite their postseasons coming to an early close.

The NCAA’s cancellation of its national championships affected two Newman wrestling students, Kameron Frame and Tyler Lawley, who had qualified for the tournament.

The bowling teams, though not governed under the NCAA, also had their sectional and national tournaments cancelled this year.

Pryor said she and the rest of the Athletic Department empathize with the student athletes who have missed out on opportunities because of these unprecedented nationwide cancellations. All these sudden changes and loss of team practices as an outlet, she said, have the potential to take a toll on the mental health of student athletes.

Colvin said it took about a week for her to fully process that her time as a college athlete, her time in Kansas, and, in many ways, her time as a traditional college student, was over.

“It hit when I had to help one of my classmates pack. I just started crying. I didn’t expect saying goodbye to them would make me cry. That was when I realized, I won’t get the closure or goodbye that I want, and there’s nothing I can do about it. I had to rip off the bandaid and just do it and move on,” she said.

That weekend, Colvin drove 16 hours to Arizona all the way through and spent a day unpacking. She said that, as she reflects on the situation, she recognizes the gravity of the pandemic’s effects on other people and feels like home is where she is supposed to be.

“Despite the fact that there were decisions that were made up to this point that had really hurt, look, I’m home, I’m safe and I’m healthy, which is all that I can ask for at this point,” she said.

Colvin said she will remember her time at Newman fondly and hopes she can return one day to celebrate the good times she experienced.

“I want to be able to see Newman again as a place that I call home, not just a place I had to say goodbye to because of the situation,” Colvin said. “If I go back for a celebration now, it wouldn’t be for closure, but I would go back because this is a place that transformed my life for four years, and I’ll never forget that.”

Majority of on-campus residents move out, but the halls stay open