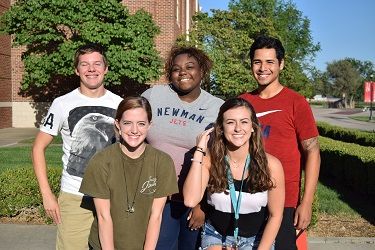 If you love ABBA and fun-upbeat musicals, then students from the music and theater departments have the show for you. “Mamma Mia!” will be choreographed and directed by professor of music Deanne Zogleman and adjunct music director Paul Graves  Nov. 15-18.

“Mamma Mia!” is a musical covering young Sophie’s journey to find her dad in an attempt to have him be a part of her wedding.

Unbeknownst to her mother, Donna, Sophie invites the three men, Harry, Bill and Sam, who have the potential of being her father.

Sophie picks up on clues about these men from a diary her mother kept from around the time Sophie was conceived.

The musical features songs by ABBA that help to tie the story line together.  Songs such as “Mamma Mia,” “Dancing Queen,” “Super Trouper,” “S.O.S.” and “Honey, Honey” will be performed during this rendition.

Sophie Sheridan will be portrayed by sophomore Rebekah Lipinski.  Sophie will be accompanied by her trusty friends Ali and Lisa, portrayed by freshman Sheridan Sommer and freshman Marie Moore.

PHOTO: THEATER AND MUSIC STUDENTS are getting excited to put on "Mamma Mia!" this November. Carley Sullivan, Photo Editor