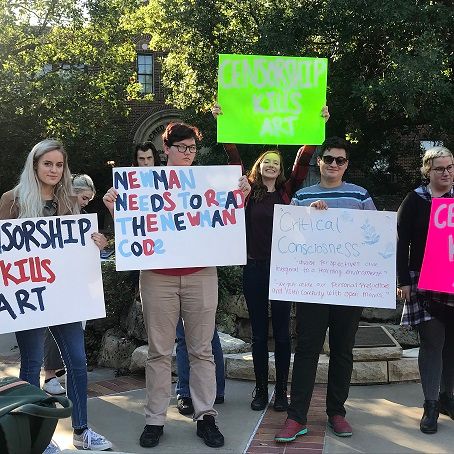 A group of 14 Newman students protesting what they say is art censorship at Newman marched through campus late Wednesday afternoon, chanting and holding signs.

The protest, which started around 5 p.m., was organized by senior theater major Lauren Spencer.

Spencer said she was motivated to organize the protest because of Newman’s shutdown of an LGBT+ art show in January, the recent creation of a fine arts board to oversee plays and art projects, and the rejection of her play proposal as a capstone project.

“I think they need to look at the way they handle these situations and think about their responsibility as an educational institution, allowing people to develop their own thoughts and opinions and not forcing their own,” Spencer said.

Students at the protest chanted: “Censorship kills art! Show Newman has a heart!”

The protest began by the fountain outside Sacred Heart before students marched to the Mabee Dining Center, still chanting. The protesters then marched around campus, through Bishop Gerber Science Center, Eck Hall, Dugan Library and Student Center, and concluded in De Mattias Hall.

While protesting, the group of students collected over 40 signatures in support of their cause.

Senior Amy Emerson said she joined the protest to support artists because of how important art is to human connection.

“I think that everybody has a little lens that they see life through, and in order to get used to broadening that lens you’ve got to listen. And, I think one of the ways we listen the most is through the expression of different forms of art,” Emerson said.

The cancelled LGBT+ art exhibit was called “Rainbow in Reverse: Queer Kansas History” and was removed from the Steckline Art Gallery in January due to “some confusion regarding the purpose and content of this particular exhibit,” according to the university’s official statement.

Provost Dr. Kimberly Long said in an emailed response that  the fine arts board was created “to ensure we didn’t have another situation as happened with the art show last January. Artists, our students, and the wider community should have an expectation that if we book a performance or showing, that we will follow through.”

The purpose of the board, Long said, “is not censorship” but rather “to protect the integrity of fine and performing arts.”

Spencer said the play she proposed for a capstone project contained the heavy subjects of “sex trafficking and female genital mutilation.”

This story will continue to be updated in future editions of the Vantage and on our website.

Bishop Gerber passes away at 87

Mr. Newman: Freshman suits up for his first year at Newman