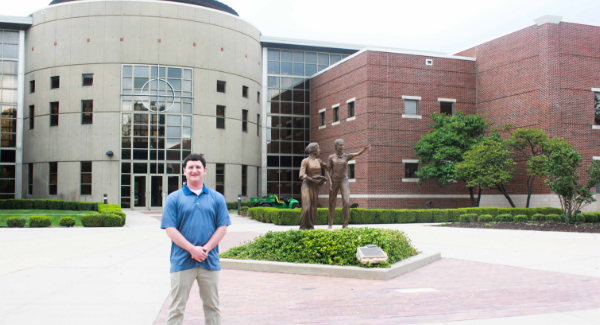 “I’ve always been all about sports,” Smith said.

From the small town of Quinter, he grew up involved in various athletic activities, including baseball, basketball, football, track and cross country, even playing multiple ones at the same time.

Smith, however, did not intend on making a career out of sports when he went to Barton County Community College. He first achieved his associates degree in Criminal Justice before he realized that his true passion was sports.

It was during his second year of school when he got involved with the sports department as a student and became the assistant sports information director.

“That’s kind of what led me into the sports field,” Smith said.

Smith transferred to Fort Hays State University and graduated in 2017 with a degree in human health performance and a minor in sports management.

As Sports Information Director at Newman, Smith’s job is to keep up with the 18 sports on campus. He is responsible for designing all of Newman’s athletic events and for relations with the media at all athletic home games.  He also writes press releases for Newman’s athletics online page.

“Oh, I love it,” he said, also mentioning that everyone has been very nice and friendly, especially his assistant sports information director, graduate student Derrell Epts. “He’s just been awesome. He’s made it a lot easier.” Smith said.

You’ve seen her art, now you know her Name

The DisAdvantage- The Ruff Truth Behind Homilies