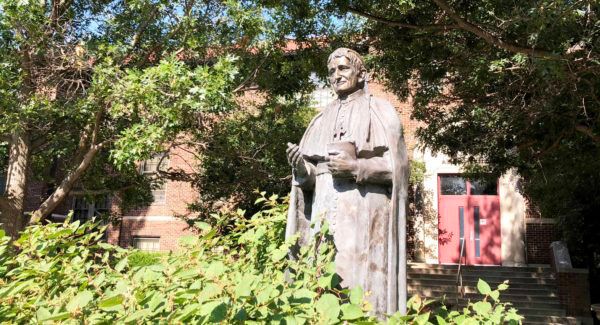 University not likely to add 'Saint' to its name

Following the canonization of  St. John Henry Newman, it seems natural for his namesake’s university to follow in St. Newman’s change of status. However, conversation around a name change has been minimal.

Clark Schafer, director of university relations, said he doubts that Newman University will make any moves away from its current name.

“Right now there are not any discussions going on about a name change,” he said in an email.  “The executive committee of the board will have it on an agenda… but I’m not anticipating any changes to the school’s name.”

Still, the saint’s status will be reflected around campus, Schafer said.

“We will be making updates to various areas of campus which have printed assets that refer to John Henry Cardinal Newman and change those to St. John Henry Newman,” he said. “We are also making changes to our website.”

Senior Jacob Kleepsie is one of many students who doesn’t see a need for any change.

“If we were John Henry Cardinal Newman University, than maybe,” he said. “I personally feel like it’s an extra unnecessary change.”

Those who would like to see a name change, like freshman John Suffield, are cautiously hopeful. “I think it’d be really cool for [Newman] to become St. Newman University. I’ve also heard a name change like that is expensive… I don’t see happening in the near future, but I’d like to see it eventually."

The English department is a pretty 'lit' department