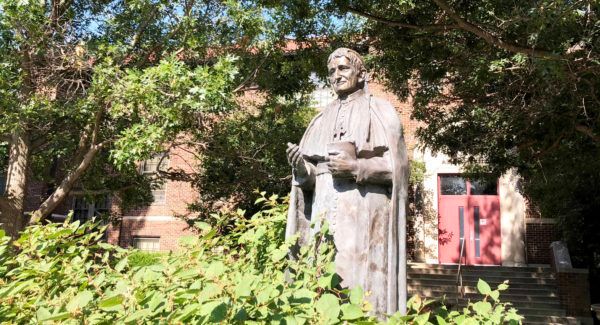 Prayer requests are a tradition

If there’s one thing members of the Newman Community can count on when opening their email accounts each day, it’s that a prayer request will be waiting.

The requests are frequently sent out to the entire campus from an account called “NU Prayers,” and they ask for prayers for people who are facing illnesses, whose relatives are ill, who have lost a loved one or who just need support.

They always end with a Bible verse that demonstrates the power of prayer. A recent example:

“Be strong and steadfast. Do not fear nor be dismayed for the Lord, your God, is with you wherever you go.” (Joshua 1:19)

The NU Prayer requests have been a staple at Newman University since the mid-1990s.  Rosemary Niedens, associate vice president for Academic Affairs, said that prior to her arrival to the university in 1999, the program was well established.

“It’s one of the things that distinguishes the institution from others,” Niedens said.

Emily Simon, the assistant director of Campus Ministries, operates the NU Prayers email account. Simon, who began her role in October, said that the process of requesting prayers is easy and that a person in need of prayers need only send an email directly to the NU Prayers email address. Simon crafts the request and personally selects the accompanying Bible verse, she said.

The prayer request system has become important for many people in the Newman community, said Sister Charlotte Rohrbach, who even utilizes it as a form of communication to those around her.

“My family, friends, and colleagues depend on it,” Rohrbach said.

In addition to the requests being sent out to all current students and staff, they are also sent to the main office of the Adorers of the Blood of Christ.

“The request are also sent to the sisters, which is very comforting to me knowing they are praying for us,” Niedens said.

Niedens said that no matter the request or the reason for it, a message will be sent out if it’s requested.

“If people feel the need for prayer then that’s what's important, rather than somebody saying, ‘Oh that's not worth sending out,’” Niedens said.

The email address for NU Prayers is nuprayers@newmanu.edu. Notifications are sent out multiple times throughout the week.

“It’s really nice to know if you do have a prayer request that you have such an easy way to reach out,” Simon said.

VP for Advancement leaving in December