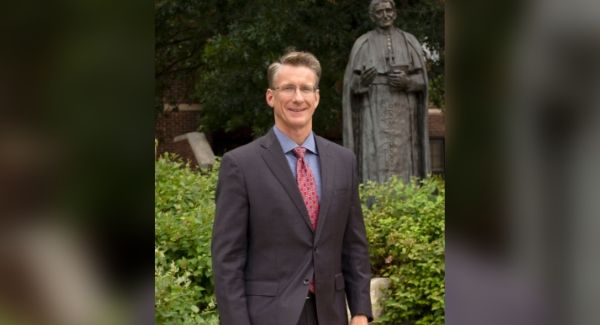 VP for Advancement leaving in December

Vice President for Advancement J.V. Johnston will be leaving Newman in December to serve as the new executive director of the Guadalupe Clinic, a nonprofit Catholic organization that  works to provide healthcare for people in need.

His position is not likely to be filled until a new university president is hired sometime after next semester, Officer in Charge Teresa Hall Bartels said.

Johnston, who has been in his current position at Newman for over five years, said his two passions are healthcare and education, and that accepting the position at the Guadalupe Clinic felt like the next natural step to take.

“God put it in front of me, and I asked him what I should do next,” he said. “...and I wanted the opportunity to grow and to lead an organization.”

Johnston has been the vice president for advancement for five years. Over that time, he had helped lead Newman’s Facing Forward campaign, which funded the construction of the Bishop Gerber Science Center and renovations in Eck Hall.

“My favorite part about working at Newman was my team in advancement,” he said. “We had fun at work.”

Bartels, who will serve as interim president for the university after Noreen Carrocci retires in December, says the new permanent university president should play a part in selecting a new vice president for advancement.

“It makes sense for us to wait on hiring and allow that new president to make sure that they have a great fit,” Bartels said.

Johnston’s departure also means that after December, the president’s cabinet will consist of three people from this semester: Vice President for Finance and Administration Jennifer Gantz, Vice President for Academic Affairs Kimberly Long, and Bartels.

In the meantime, Bartels said, the university advancement team will divide Johnston’s responsibilities, and she said she plans to inquire as to whether any additional help will be needed in the department.

Despite the fact that the position will be left open for a little while, Bartels said the university plans to continue with its current fundraising goals for the year as normal.

“I have a lot of faith in both Clark Schafer on the relations side and [Senior Developement Officer] Beth Fatkin...she has a lot of great experience,” Bartels said.

Johnston said that while he will miss Newman, he also believes the university will be left in good hands.

He said that although he will not officially work for Newman, he still strongly believes in the mission of the university, and that  because he will still be in town, he will still be cheering on the school’s success.

Athletic facilities are on the school's radar for improvements

Prayer requests are a tradition