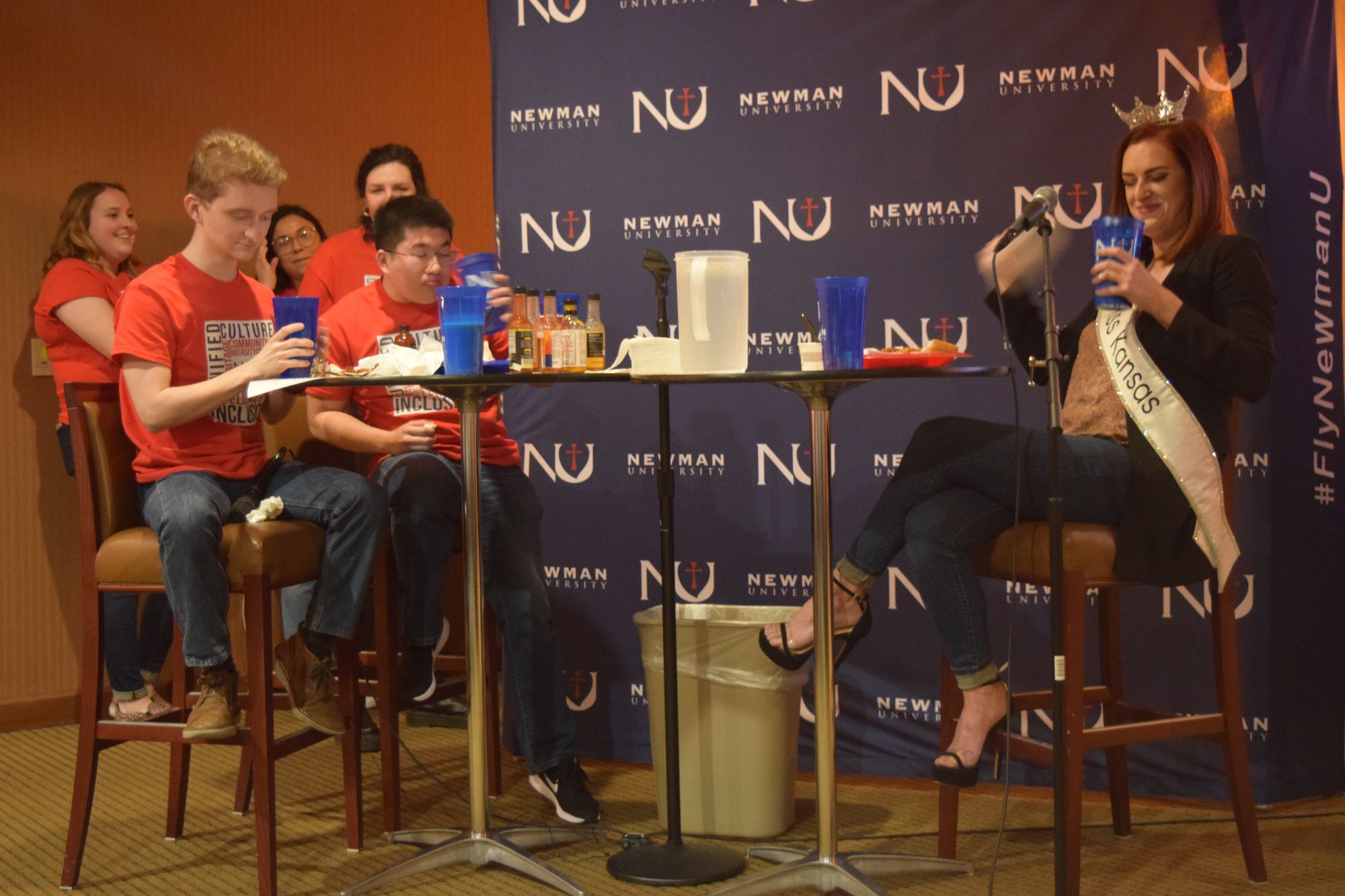 It was getting spicy Monday night when Diversity Round Table (DRT) and Student Life co-sponsored Spicy Wings and Spicy Topics.

Jonathan Liu, vice president of DRT, said the event was inspired by the YouTube show, “Hot Ones.”

During “Hot Ones,” celebrities from Gordon Ramsay to DJ Khaled eat hot wings while being grilled by host Sean Evans on everything from awkward Instagram posts to their most recent projects.

Before the first wing, Wooten said, “I don’t eat spicy food, ever. Like, pepper is spicy for me.”

Wooten also talked about her social initiative, “The Artist’s Fingerprint,” and her message for students across the state to be persistent in their dreams; it took seven years of competition before she won the title of Miss Kansas. She exemplified the virtue of perseverance by speaking through tears and gasps as she ate the fourth and fifth wings.

Allen shared about his love of coaching and its unique challenges. He said that neither of his boys care for basketball and are instead baseball fanatics. He also watched the viral Vine featuring a young point guard excited for his game the next day.

“He sounds just like most of my players,” Allen said.

Before the last wing, a clip was shown of basketball legend Shaq on Hot Ones eating a wing coated in the last and spiciest sauce, where he infamously said, “Kansas don’t know how to do no hot wings.” After taking a bite, Shaq immediately started chugging milk and begging for ice cubes.

Ojile said, “I didn’t even taste the wing. I took a small bite and only experienced pain.”

After taking a bite of the last wing, Allen couldn’t even speak.

“I am absolutely terrified,” Whipple said before taking his first bite.

Whipple told the story of the first date with his wife, which involved going to a rodeo.

“I dressed like an extra in a Matt Damon movie, like, straight out of Boston…They wound up taking out this dummy of Bill Clinton, and were like, ‘We have President Clinton here!’ And they ran him over with bulls… It was a real crash course in Midwestern politics.”

Despite his reluctance at first, Whippel handled the heat best. Camarena, who had trouble asking questions after the last wing, was shocked.

“Of all the participants, we thought you’d do the worst,” she said.