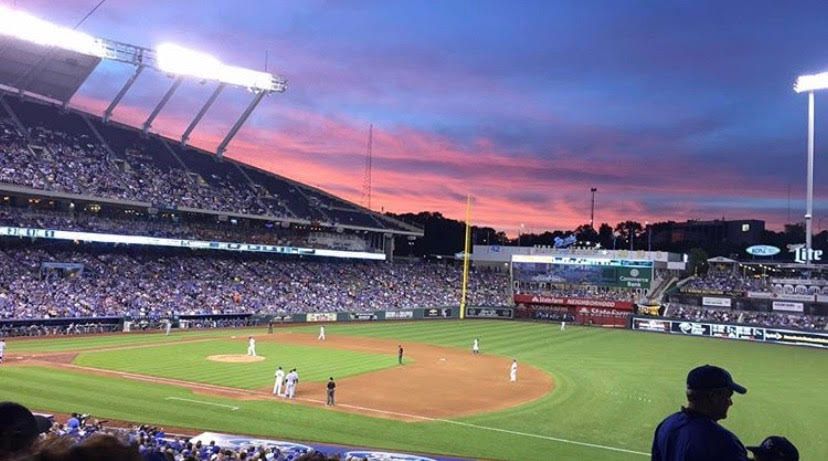 Arrowhead Stadium held 16,000 fans for the Chiefs-Texans game on Sept. 10 for opening day of the NFL. But less than 600 feet away, the Royals home, Kauffman Stadium, is still playing in front of stands full of cardboard cutouts.

In the NFL, five teams are allowing fans in their stadiums and 18 other teams have plans to allow fans into their stadiums, according to ESPN. No team will permit more than 25% stadium capacity to allow for social distancing, and all fans have to wear masks at all times.

On the contrary, the MLB announced Tuesday afternoon that the playoffs will be played in a different format than the regular season. They will be going to a “bubble” format, similar to the NBA. Teams will play all playoff games in Arlington, Houston, San Diego and Los Angeles rather than on their home fields. All games will be played with no fans. All players and their families will be quarantined to their provided housing and the fields only.

I believe the MLB is going overboard with their “bubble” plan. After playing 60 games in a non-controlled environment and letting the players play in their home stadiums, it feels unnecessary to throw the playoff teams into a bubble and take home field advantage away from them.

While there were instances over the regular season where games were postponed due to positive COVID tests from players, the situation was handled and the games eventually resumed successfully.

I believe that the MLB could adopt a plan to allow in socially distanced fans for the playoffs, similar to the NFL.

The experience of a playoff game is something like no other sporting event. If there was ever a time to allow fans into MLB stadiums, this is it.

“With the exception of Stanley Cup overtime action, there’s nothing like MLB World Series games where every pitch, every play counts,” Rojas said. “Trying to get those 27 outs and have the lead at the end, along with the atmosphere before and after games, is incredible.”

While the closest team to Wichita is the Kansas City Royals, who are 3.5 games out of the playoffs, no Newman students will be going to any playoff games regardless.

Another disadvantage to the idea of moving playoff games is that the athletes will not get to compete in their home stadiums, fans or not. And they’re accustomed to playing the way that their field plays.

Another negative factor is time zones. For example, the New York Yankees are going to be playing their games in Los Angeles and San Diego, a three hour time change from what they’re used to.

After the first week of the NFL allowing fans, I believe the MLB might need to reconsider taking the home field advantage away from not only the fans, but the players as well. Let the fans in.