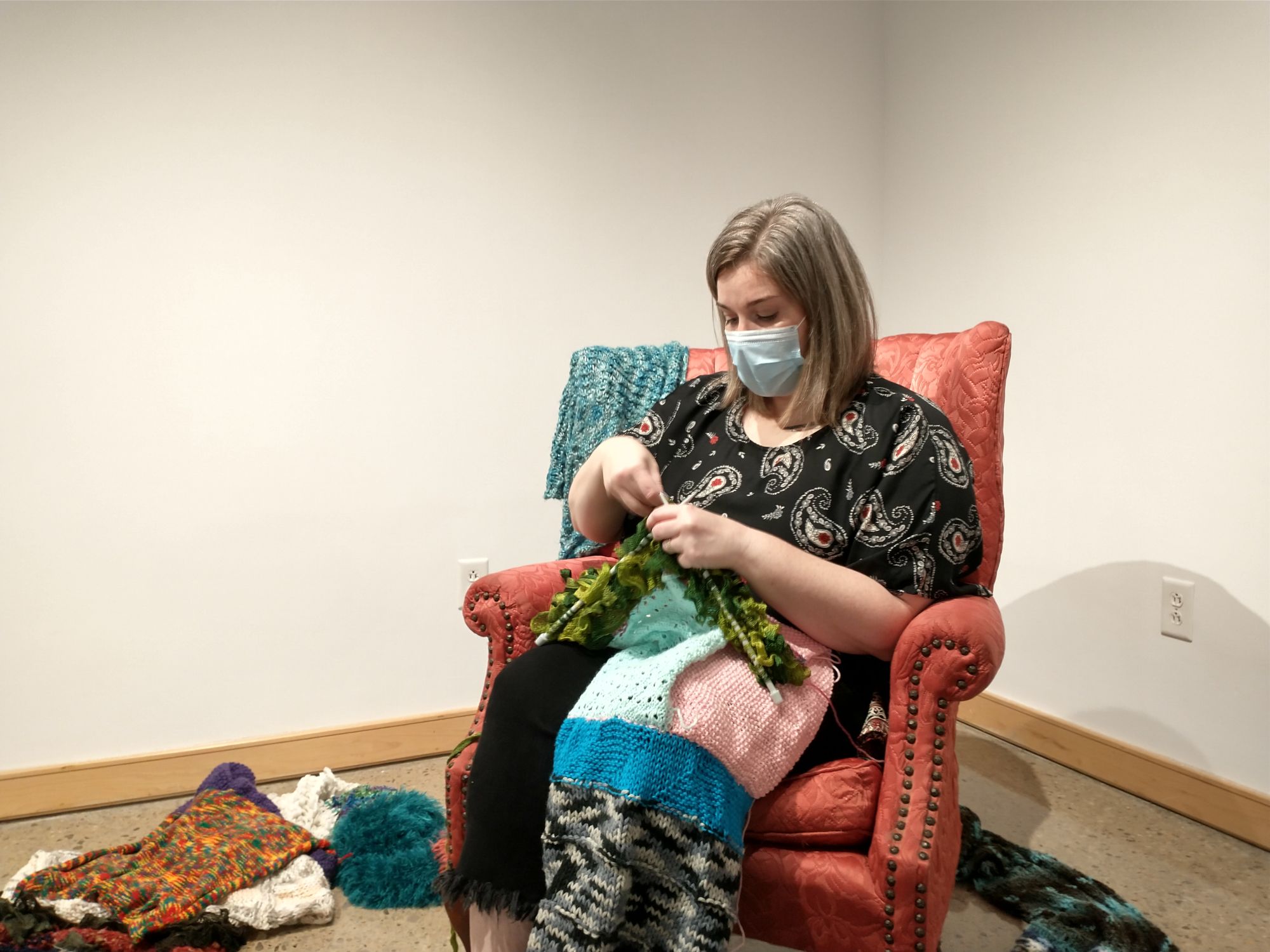 Despite canceled and postponed shows, the Steckline Gallery returns this semester with an art show titled, “React, Reflect, Respond.”

Director of the Steckline Art Gallery Shannon Johnston said the show was inspired by a desire to create a space where people could reflect and respond to the last seven months and hope for a better experience.

“I think that’s the journey all of these artists have gone through,” Johnston said. “There’s a reaction. But then there’s a moment of slowing down or reflecting, and then actually responding to what’s happening into our community around us.”

Johnston said the show, which will run from now until the end of semester, features art from three local artists: Amy Huser, Hugo Zelada-Romero, and Johnston herself. At noon today, Oct. 27, and in mid-November, each contributing artist will present through Zoom about their works and processes.

“[Huser] invited people to share on a strip of fabric just by writing down what they had learned through the pandemic, through the quarantine, through social distancing, but also through the racial injustices that are happening in our world right now,” she said. “Then she takes those little strips of fabric and she weaves them into these beautiful little whimsical things, and it’s this idea of redeeming that lesson and taking that and embodying it in a way that has hope.”

Zelada, who has also exhibited at Steckline previously, organized digital “exquisite skeletons,” a drawing game where artists contribute or remove one thing at a time to a base image, Johnston said.

“It was a way of artists to connect and be creative and collaborate, although separated and...staying at home,” Johnston said.

The final piece of the show is Johnston’s contribution, “The Scarf,” her response to the 2011 tsunami, earthquake, and nuclear disaster in Japan.

“There was a whole community of people who at that time were knitting individual scarves and sending them over because it was winter,” Johnston said. “I started thinking about the scarf as a metaphor. I knit you a scarf…and then I give it to you and you physically wrap it around your body, and it becomes a hug…I wanted to knit a hug for Japan, but I didn’t want to just hug one person; I wanted to hug everyone.”

Johnston said that she recognized that she couldn’t embrace a whole community by herself, so she invited a community of artists to send in pieces to add to the scarf. On the anniversary of the disaster, Johnston said she was able to share it with the hardest hit community in Japan and some of those affected were able to contribute to the scarf.

“Through a translator [I] was able to talk to these individuals, largely older Japanese women, who said, ‘Someone else is going to need this,’” Johnston said. “The idea is to take my grief and turn it into a gift to someone else.”

She said it’s been a unique experience to be able to share the scarf with her local community, reflecting on the family and friends she and others have lost and the hardship of being distant from loved ones.

“My grandmother who lives in Oklahoma City has not been physically touched by anyone other than her physicians since March,” Johnston said. “To know that she’s knitting a piece and has mailed it to me, and we get to touch the same thing...there’s a sense of embracing still within that.”

Johnston said the scarf now stretches over 200 ft. long and has been added to and exhibited in the United States, Japan, and Australia in response to wildfires, tornadoes, and hurricanes.

“It’s been added to by tons of people so it feels like, in the midst of a quarantine and social distancing, a gesture that references a hug and care seemed appropriate,” Johnston said. “It’s interactive. People are welcome to sit and knit.”

An important part of the show, Johnston said, is that two of the pieces are interactable.

“People are welcome to come by, participate, write on a piece of fabric for Amy, knit, or even just use the space,” Johnston said. “Reflect on the work, reflect on the current state of our world, respond in whatever way is appropriate for you with your gifting.”

Johnston said she hopes to hold a closing reception for the gallery in December or January, depending on COVID-19 restrictions. Next semester, she said, she hopes to feature three shows by local artists and the first ever, though second planned, senior student exhibition.

The Steckline Gallery is open from 9 a.m. to 4 p.m. You can learn more about the Newman University Steckline Art Gallery on their Facebook page or their Instagram, @stecklinegallery. You can also reach out to Johnston via the contact page on her website, shannonmariejohnston.com.