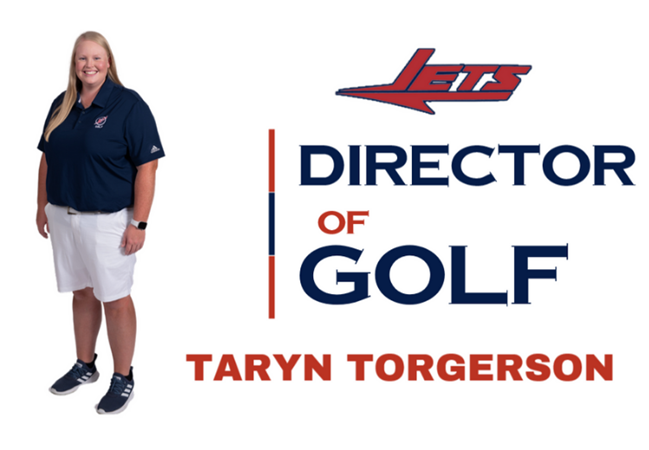 The men’s golf team has a new head coach, and she is no stranger to Newman golf.

Taryn Torgerson joined the Jets in 2019 as the head coach of the women’s golf team. This season, however, Torgerson has doubled her duties and is now coaching both the men’s and women’s teams, taking on the role of Director of Golf.

Now that she is the coach of both teams, Torgerson said, she is looking forward to spending more time on the golf course with her athletes.

“It has been really fun building relationships with the guys and then continuing to build the ones that I already had with the girls’ team from last year,” she said. “They also can come together and support each other as well now that they are merged together, in a sense, under one coach. It has been really fun.”

Torgerson, who has been playing golf since she was just 4 years old, said she always wanted to be a golf coach.

“I have been around the game for a long time. My brother and I played and my dad was a coach, so I always knew that someday I would want to coach,” she said. “My coach at Wichita State had a big impact on me as well so that just solidified that I wanted to pursue this career path and become a golf coach.”

Torgerson, a native of Buhler, Kansas played golf for four years at Wichita State University, claiming two individual conference titles. She then went on to work as an assistant coach for the Wichita State Women’s Golf team just before being hired at Newman.

Torgerson said her experiences through playing and working under such a great coach at Wichita State along with a lifetime of learning and listening to her dad coach over the years has influenced her coaching and allowed her to relate to her athletes.

Torgerson said what she has enjoyed most about coaching at Newman is building relationships with her athletes and watching them grow and develop as golfers.

Going into her first season as the Director of Golf and having not seen her team compete in almost an entire calendar year, Torgerson said, her excitement is at an all-time high.

“Just to be able to get back on the course and relish the opportunity to get out there and compete again and wear Newman on our chest and go out and represent our university is exciting,” she said.