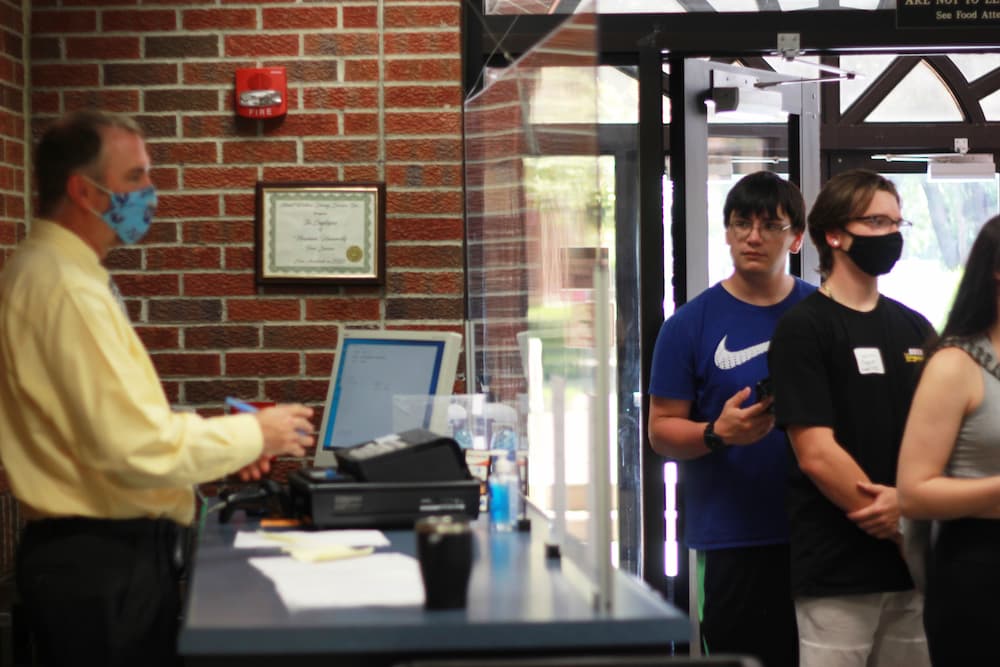 Ordering food for your campus club? Not so fast

For the past few years, Newman students have become used to eating food from restaurants such as Chick-fil-A and Pizza Hut at campus events.

This year, though, most of the food at events has been provided by Great Western Dining, the outside food service that runs the Mabee Dining Center.

After suffering financial losses because of the COVID-19 pandemic, Great Western Dining this year has begun more strictly enforcing a section in its contract that allows it “right of first refusal” to provide food served on campus.

The policy has been in Newman’s contract with Great Western Dining since it became the provider for campus 31 years ago, said Director of Food Services Chris Heck.

All higher education institutions have contracts with the food services on their campuses, Heck said. Right of First Refusal means that the school agrees not to purchase food outside of the food service on campus unless the company opts not to provide it.

“This is on every campus in the entire United States of America,” Heck said. “That's how it’s supposed to work.”

Heck, who has been the director of food service at Newman for around seven years, said that some time before he started, the policy must have been loosened. He said he thinks Great Western Dining was probably performing well financially at the time and wasn’t worried about making ends meet. But now, things are tighter.

Heck said he has gotten push back from some students, who say that the policy is too restrictive for student clubs and organizations. The cost of food from Great Western Dining is sometimes double the cost of what the clubs would spend at local restaurants, and that’s impacting their budgets.

Senior Marie Moore, president of the Newman Medical Professionals Club, said that her club has a deal with Pizza Hut and can get $7 pizzas when it orders more than seven pizzas. The club wanted to provide pizza for its first general meeting on Wednesday, and Moore, following the newly reinforced policy with Great Western Dining, went to Heck to request that NUMPC be allowed to buy the pizza from Pizza Hut.

She said Heck denied her request and said that Great Western Dining could provide the pizza instead. Moore agreed, not knowing the price of the pizza at that time.

Later, Moore found out that the pizzas from Great Western Dining were $14 each.

“I think that that is a concern that a lot of the clubs have is the pricing for a lot of the options,” Moore said. “If Chris tells them that Great Western can provide, but he can't also provide some sort of a discount or a price match, it's kind of, I don't want to say unfair but … it just doesn't feel like you're taking into account that student organizations don't always have the funds to pay twice as much for a pizza.”

Moore said she did not try to price match with Heck at the time.

Heck said that Newman controls the price of the food Great Western Dining offers on campus and that he thinks the prices are fair.

Director of Student Activities Chris Mershon said that technically, the money that clubs use to make food purchases and any other purchases is not the university’s money. The money that funds clubs comes from the student activity fees that students pay at the beginning of the year. That money is parceled out to clubs to help them get started, and then they can do their own fundraising throughout the year, she said.

“So … the students are kind of confused about this because it isn't technically the university's funds that they're using,” Mershon said.

Moore said that NUMPC members pay a $5 fee to be a part of the club, and that’s how the club funds the pizzas.

But Heck said that if the school is writing the check, the clubs that want to purchase food have to go through Great Western Dining, even if they’ve fundraised.

“At the beginning of the day, it's all the students' money, everything is,” he said. “And that's what runs our university is money. But if the school has to write a check for it, then the food has to go through me, or at least I have to have the first right of refusal.”

Heck said there will not be a penalty charged directly to a club or organization if it chooses to purchase something without going through Great Western Dining. There will be a penalty to Newman, though, if the university writes the check for the club’s food purchase and doesn’t ask permission from Great Western Dining since that would be a violation of the contract.

Mershon said that students involved with clubs have been unhappy since the policy has been reinforced.

“I've only been here a short while, but what I've noticed is that the clubs are no longer able to provide the amount of food that they need for each club event because they're having to pinch pennies because the amount that Great Western dining is requiring of the clubs is about double the price of anywhere else that they can get their food from,” Mershon said. “So it is more difficult for the students to be able to get more people to their clubs because the food is not as much.”

Mershon also said that students should understand that they need to honor the contract.

“We want to support Great Western dining because they have been a great service to Newman as they have provided breakfast, lunch and dinner for so many students over the years. But we do want to advocate and hear the voices of the students that are not happy with the situation at the moment. I think for the most part, students should know and continue to just work under these policies until we can find some sort of solution for them,” she said.

Mershon said she is grateful for students’ patience with the situation.

“Thank you for students stepping into the shoes of both sides. Those who are having to enforce and those who are enforcing,” she said. “It's been a hard year for everyone. And we recognize that money is a difficult issue no matter what, but we are all people, and at the end of the day, these are very small issues, and they are not anything that cannot be worked out.”

The Ty-Rade: Chivalry is dead and women killed it