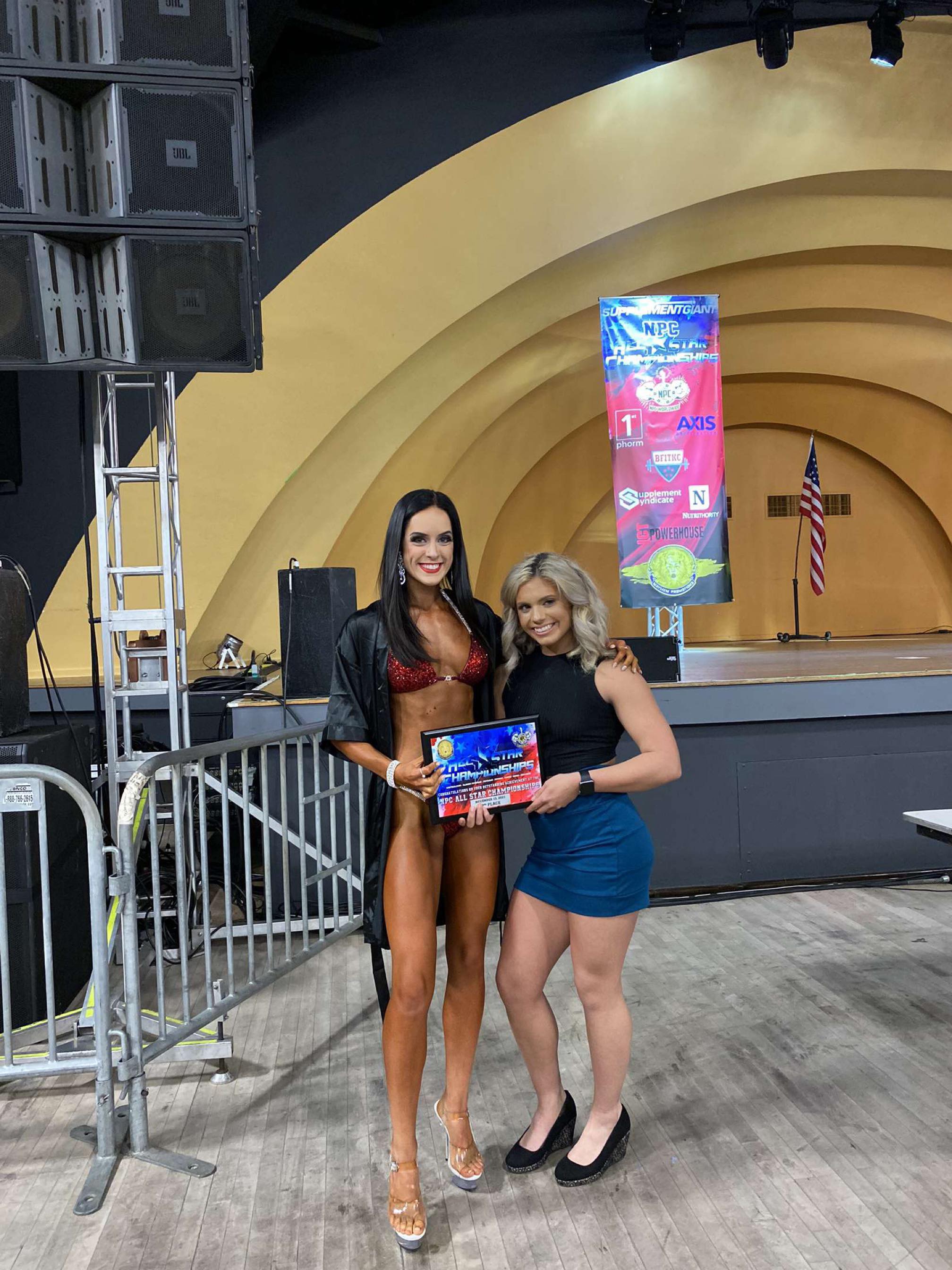 Rooslana Rusk, 2021 Newman alumna, entered her first bodybuilding competition on Nov. 13 with “realistic expectations.” She’d spent 10 weeks prepping for the 2021 National Physique Committee (NPC) All Star Championships and a longer time dreaming of entering the competition. Rusk’s goal when she entered was to “not stick out like a sore thumb” and to be proud of herself no matter what. So when the winners were announced and she heard her name called for second place, she was shocked.

“I guess I had what they were looking for,” Rusk said. “I was very proud.”

Rusk had been lifting since high school and knew that she was capable of entering a competition like this.

“And so I was like, why not? I wish there was some big, deep, romantic reason, but it just appealed to me,” she said.

Rusk, who majored in both communications and theatre while at Newman and had many lead roles in Newman productions, said she’d missed the stage after graduating.

“This gives me an excuse to kind of get back in my element, but in a very, very, very different way,” she said.

The 2021 NPC All Star Championships were held Nov. 13 at the Cotillion in Wichita. Rusk was one of four contestants in the bikini division of the competition.

Before the competition, Rusk contacted a high school friend and certified personal trainer Elyse Magnuson to help her prepare.

“‘Prep’ is kind of just code for your diet changing,” Rusk said. “We did it macro-based, so she didn’t give me a strict meal plan of specific foods to eat. She just said ‘This is your carbs, this is your fats, this is your proteins, and we only speak carbs, fats and proteins.’”

For Rusk, the diet was the most challenging part of the preparation.

“Being at that low percentage of body fat is really unhealthy...It’s not sustainable,” she said.

Although watching what you eat so strictly can be breeding grounds for eating disorders, Rusk said, she feels the experience had a positive impact on her.

“It just kind of boils down to how forgiving you are of yourself,” she said. “I did have a slip up and I just told myself it didn’t happen. It was one night and I was just like, ‘Hold on. Let’s just get back on track and we’re gonna be fine. We don’t need to let this spiral into something that it doesn’t have to be.’”

Along with dieting, Rusk continued to lift the same regimen that she had been lifting pre-prep throughout the ten weeks.

“I lift six days a week and I rest on Sundays,” she said. “Near the end when you’re super depleted on calories and everything and you’re like a zombie…you maintain what you do have because at a certain point, when you’re not eating enough, you can’t build any more than you’ve got. It’s just about keeping it. So there was no growing during prep, but it was just kind of like tightening everything up.”

Knowing how to pose is also a major part of the competition. Rusk reached out to a posing coach and met with her around once a month before the Championships.

Overall, Rusk got more out of her experience than the second place title.

“I learned how to be consistent even when I don’t want to be. I learned how to put myself out there when I’m afraid to; reaching out to people saying, ‘Here’s what I need. Can you help me?’” she said.

She said bodybuilding offered her structure and something to look forward to outside of work.

“I needed a way to build a little second life that I could be proud of,” she said.

Rusk was Magnuson’s first trainee for a bodybuilding competition, and Magnuson was proud of Rusk’s second place finish.

“I was really excited when she got second place because that was a really big achievement for her,” Magnuson said. “She was also my first client who ever competed.”

For now, Rusk does not have plans to enter another bodybuilding competition but is taking an “intentional offseason.”

“I’m just gonna do me and grow for a while,” she said.

CAB is hosting an event. Breakfast and Bingo is its name-o