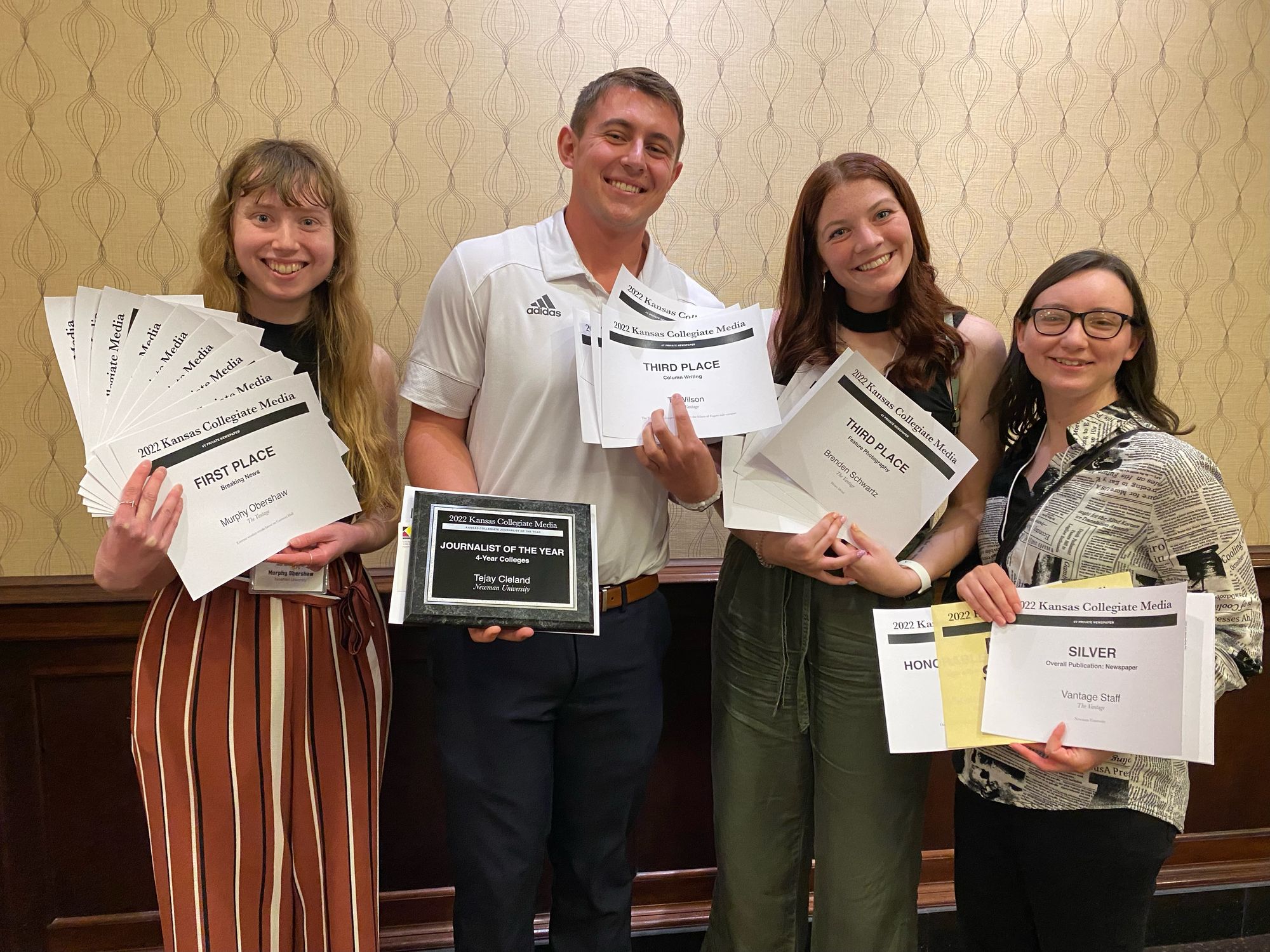 In addition, the paper’s editor-in-chief, Tejay Cleland, was named the Kansas College Journalist of the Year, beating out competition from all other public and private four-year colleges in the contest.

The conference, back for the first time in-person since 2019, took place Sunday and Monday at the Drury Broadview Hotel in downtown Wichita. More than 100 student journalists from colleges across the state attended the conference, which was put together this year by Vantage adviser and Newman adjunct professor Denise Neil.

In addition to the awards banquet, the conference offered sessions led by professional journalists from The Wichita Eagle, KSN-TV, KMUW, the Associated Press and more. Cleland, who’s worked as a full-time reporter at KWCH-TV since January, also led a session titled “How I got a job in TV news before I even graduated.”

Among the other Vantage staffers who earned awards at the event: Madeline Schnieders, Ty Wilson and Brenden Schwartz.

Schwartz, who won awards in feature writing, review writing and feature photography, said he was pleasantly surprised by the contest’s outcome.

“It’s really cool to win some awards, especially since I just joined The Vantage this year,” Schwartz said. “It really tells me a lot about myself and the natural inclination I have toward this field. So it really just encourages me to push forward with it.”

Cleland said that he was honored and proud to win the Journalist of the Year award. The last time a Newman student won was when Matt Riedl took home the trophy in 2014.

“I was definitely surprised that I won considering I was up against the public four-year schools like Wichita State and Kansas State,” Cleland said. “So to be able to win this big award and knock off the big schools at the conference is definitely a big win for the small school guys like us.”

Cleland said he is just happy and proud that the staff of The Vantage was able to earn some recognition for all the hard work they put in.

“Not only myself but a lot of other people on the staff have put a lot of blood, sweat and tears into the paper,” Cleland said. “So it’s nice to be awarded for all of our hard labor that we’ve put in throughout the entire year and be recognized for it.”

Here is the full list of awards that the Vantage members brought home:

What are SGA president-elect's plans? Q&A with Ian Lecki

Intramurals start the semester with cornhole

Valentines Day is the most overrated holiday. Here's why

The new "Avatar: The Way of Water" is a must-watch