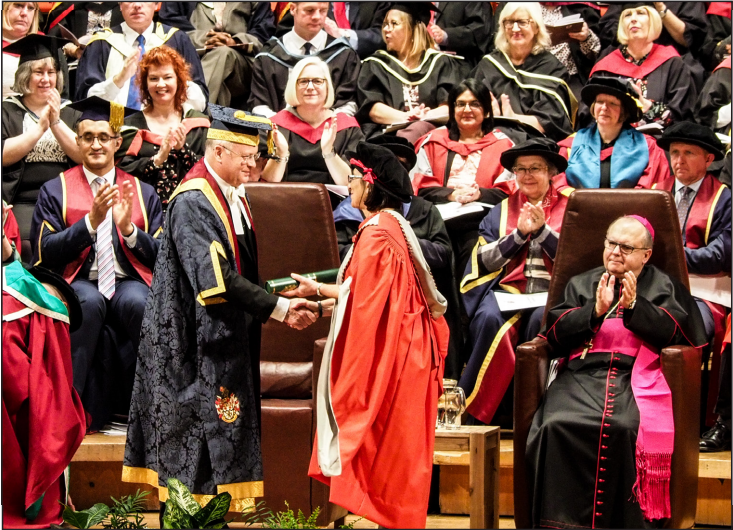 The program for the graduation ceremony said Carrocci received the award for “her outstanding contribution as an academic leader,” her charitable works, and “to celebrate the connection between our two universities in this Golden Jubilee year.”

“It’s quite humbling actually,” Carrocci said. “I don’t think it’s about anything in particular I’ve done. I think it’s more in recognition of our university’s partnership with them.”

This year’s graduation, celebrated on Oct. 23, marked a particularly noteworthy milestone for the university in Birmingham, England, said Carrocci, because its university is celebrating its 50 year anniversary.

Newman University Birmingham began as a teaching college in 1968. Carrocci said education continues to be a major draw for students at the university in Birmingham, and there were around 400 students graduating from its School of Education alone this year.

Golden, who oversaw the exchange of students between the two universities over the past few years, said “it was a great honor for us,” when Carrocci was invited to Birmingham to receive the honorary degree.

Carrocci said she enjoyed the trip and appreciated the beauty of the campus in Birmingham.

“It’s a really pretty campus. And they’ve done a lot of upgrades since our exchange started,” she said.

One prominent feature of the campus in Birmingham is a sculpture of a globe, engraved with the same phrases from John Henry Cardinal Newman that the university in Wichita uses at its freshman orientation, Carrocci said.

Both Carrocci and Golden said the universities will continue to work closely together to continue to support student exchanges between the schools and possibly coordinate more faculty exchanges as well.

PHOTO: PRESIDENT NOREEN CARROCCI recieved an honor for her leadership, charity, and the connection between both Newman Universities. Courtesy Photo, Bob Benson

Jake Provenzano gets a third chance