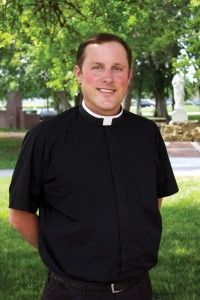 Having last appeared on stage in a Nativity play while in preschool, Father John Fogliasso is excited for his role as Father Alexandrios in Newman’s upcoming musical “Mamma Mia!”

Fogliasso said that he accepted the invitation because he believes this is a good way to step out of his comfort zone. He thanked Zogleman for the wonderful opportunity for him to “go beyond one’s typical skill set.”

“Looking back, honestly, I can say I wish that when I was in high school and in college that I would have participated in the theater departments. I think you get a lot of very important life skills and lessons by participating in productions such as this,” Fogliasso said.

Although he is a real life priest playing the character of a minister, Fogliasso said that there is no need to worry about the actors being accidentally married during a wedding scene in the show.

“In this case, obviously, everyone knows it’s not a valid celebration of the sacrament as much as a portrayal of holy matrimony….” Fogliasso said. “I never feared that we were marrying people in the theater.”

“I’m just very excited about the opportunity to participate in this play with the talented group of students and our courageous leader in Deanne Zogleman,” Fogliasso said.

Performances will be at 8 p.m. on Nov. 15-17 and at 2 p.m. Nov. 18th in DeMattias Performance Hall. The cost of tickets is $12 for the general public, $10 for seniors and those in the military, and $5 for staff, faculty, and students outside of Newman. The show is free for Newman students.

Volleyball gets set for its last match