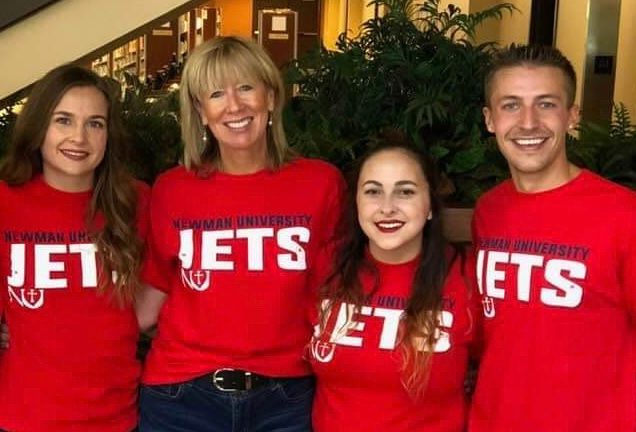 SGA gets new board after president, secretary leave school

The Student Government Association executive board has almost completely changed since the election that took place at the end of last semester.

Over the summer, newly elected SGA President Thao Nguyen and Secretary Preston Bui both left Newman and transferred to to Wichita State University. When contacted about their reason for leaving Newman, Nguyen and Bui each said they had no comment. Both were juniors last semester.

David Shubert, dean of undergraduate studies, said when contacted by e-mail that he could not say why the two decided to leave Newman.

The newly elected vice president, senior Emily Larkin, was promoted to president, per the SGA constitution.

Typically, the student senate leader would take over if a vice president left the post, but since a senate leader won’t be chosen until later in the school year, Christine Schneikart-Luebbe, dean of students, recommended that Larkin appoint someone within SGA.

Larkin appointed sophomore Kayla Gavert, a first-time senator elected in the spring, to serve as vice president and junior Mac Foley, who also was elected as a senator in the spring, to take over as secretary. Senior Courtney Klaus remains in place as treasurer.

“You never really expect it to happen but it’s in the paperwork, so you understand that it’s a possibility,” Larkin said. “Of course, it was a real shock to everyone but we’re glad now that we can pull together and start with a new beginning.”

Larkin said she was confident in her decision to bring Garvert, who works as the student life office assistant, on to the executive board.

“We were looking for someone who could really pull their weight on SGA, who had experience working with Student Affairs. Kayla won employee of the year,” Larkin said. “She’s a great fit for SGA though she’s never been on SGA before. We thought that she could use some of her organizational skills and leadership skills to really improve SGA.”

Garvert said she is ready to take on the challenge.

“I feel honored that I was thought of for the position,” Garvert said. “This gives me another chance to exercise my leadership capabilities.”

Larkin said she also was excited to add Foley’s unique point of view onto the executive board.

“A male perspective is always great as we have three females on the board, which is wonderful, but it’s always great to have new perspectives,” Larkin said. “Having Mac, who is a male and who is also an athlete, on the board was great because we can get that different perspective from a great chunk of our population here.”

“Even though my experience is limited, I am confident in my abilities. I'm very excited to learn and very excited to help out the campus to the best of my ability,” Foley said. “I want to be a champion for you. If you need something or want something to change, come let me know so I can help you.”

Larkin said she believes strongly in the university’s mission of empowering graduates to transform society.

She also promises that fun things from previous years, such as “free-ride Fridays,” will still take place but that this year’s SGA will also concentrate on student mental health initiatives and more activities that will engage students.

Last semester, the executive board ticket led by Nguyen defeated a ticket topped by current junior Jordan Ojile. The Nguyen ticket earned 63 percent of the vote.

Why I chose Newman, and my first impressions as a transfer

School scales back on classes, faculty to save money