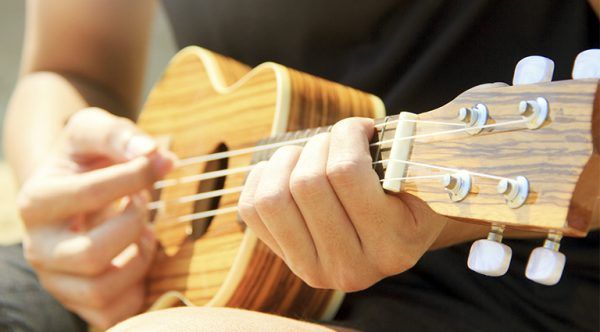 Playing a musical instrument can be exciting, and for freshman Rebecca Ortiz, that instrument is the ukulele. Ortiz has been playing the instrument for about two or three years.

She said she became interested in it after learning that her friend’s family could all play the ukulele. She said she is self-taught and has never had any formal music lessons. Most of what she learned came from watching YouTube videos.

The ukulele was not the beginning of Ortiz’s “musical career.” She said that she played the piano for about 10 years. Afterwards, she learned a bit of guitar to play for her praise and worship band, and then became interested in the ukulele. She said her piano and guitar skills provided some guidance in learning how to play the ukulele. Ortiz and her family can all play the ukulele now.

Back in South Carolina, Ortiz said, she and her family would go to the assisted living facility once a month and play different songs on the ukulele as well as sing.

Ortiz’s favorite songs to play on the ukulele are “Radioactive” by Imagine Dragons and “Hallelujah.” Whenever she feels bored, Ortiz said, it is “nice to find a musical piece and be able to play it because it is so much fun.”

Although ukuleles are becoming a trend now, Ortiz said that it mostly depends on the person’s musical preference.

“Playing both ukulele and guitar, I hear the difference. [A] guitar has a fuller, richer sound than a ukulele does, so a ukulele would be more just for fun,” Ortiz said.

If anyone is interested in learning how to play guitar, Ortiz said it is best to start by learning the ukulele because it has four strings instead of six.

“I do wish other people knew how to play the ukulele. It’d be fun. It is fun when there are other people. It is just a matter of how often you play it,” she said.

While playing a musical instrument may seem difficult, Ortiz said playing the ukulele is not that hard.

“Give it a shot, you know? Anything worth doing is going to be difficult. It’s all you. It’s all up to you. Once you even learn the basics, it is a lot of fun. It is so much fun,” Ortiz said.