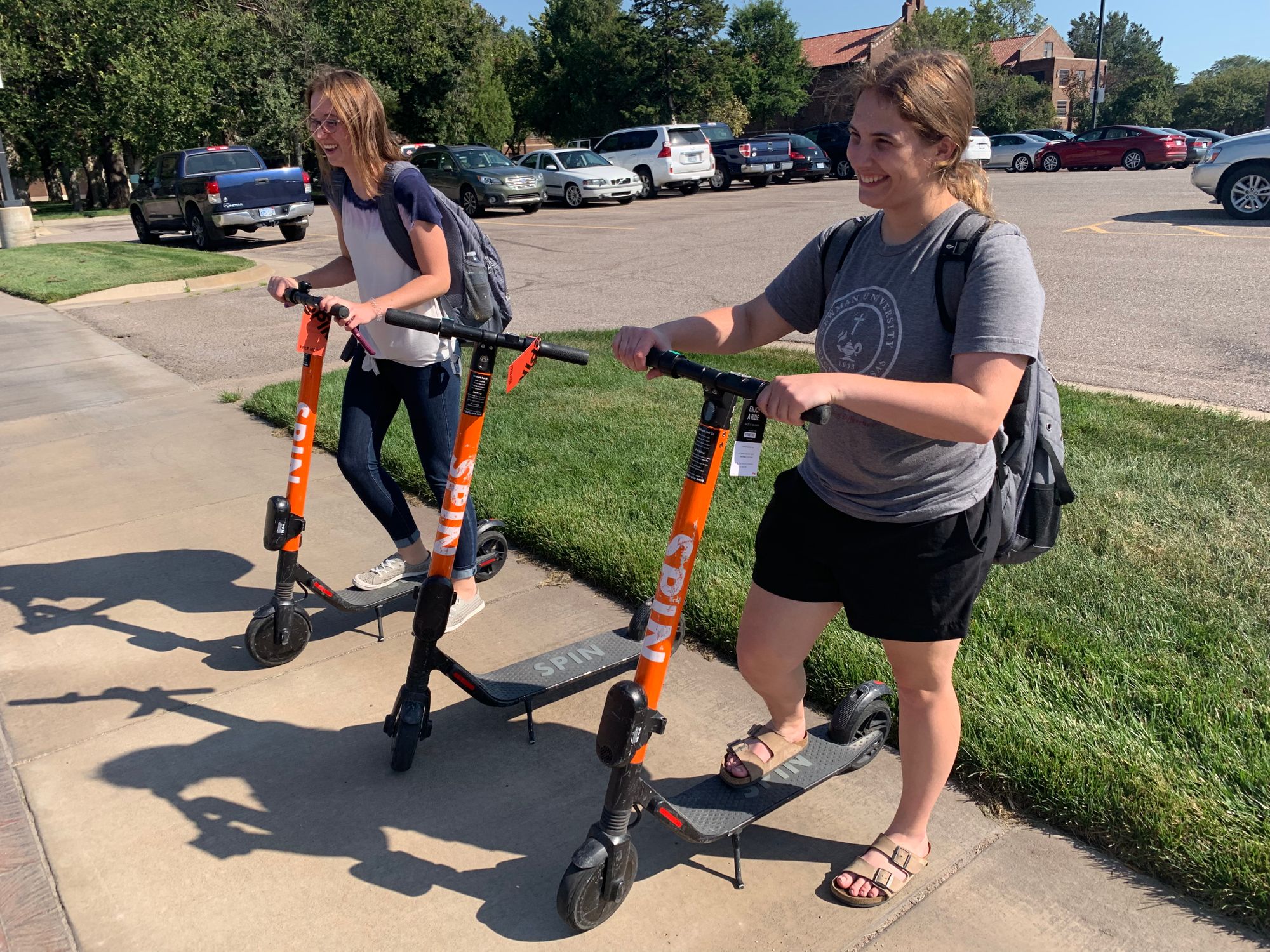 Bright orange scooters appeared on campus one morning last week. Just as quickly as they appeared, they were gone.

“No one authorized them to be on campus,” Director of Security Morris Floyd said. “They had talked about it, they had asked questions of the company, but no one said, ‘Yes, go ahead and bring scooters to our campus.’ They just showed up.”

Floyd said that Zagster, the company that owns the scooters, set them up at various parts of campus without permission.

“Next thing you knew, there were all these orange scooters everywhere,” Floyd said. “The owner of the company told me that he assumed that his people had gained permission but he did not double check that, so in the end, the company did an incorrect thing by bringing them to campus, so they never should have been here to begin with.”

Floyd said that Newman is not planning on having scooters on campus. However, the Student Government Association is still considering the possibility.

In the SGA meeting on Sept. 19, SGA Treasurer Courtney Klaus said that Zagster had reached out to Newman to discuss the possibility of putting its scooters on campus about three weeks prior. Dean of Students Christine Schneikart-Luebbe had passed the handling of it over to SGA. Klaus said that she sent a single email to Zagster to inquire about the details of how the scooters would work, but that she had never authorized the company to bring the scooters to campus.

Schneikart-Luebbe said that, had the executive board decided to further pursue the possibility of having the scooters on campus, they would have brought it to the rest of the SGA senators for voting like any other matter before approving it. She said that Floyd had already contacted the company to remove the scooters that day since they had not been authorized, but asked the SGA senators whether or not the idea of having scooters on campus was something that they would like to pursue in the future. The majority of the senators raised their hands, indicating that they would.

Floyd said the issue with the scooters was liability.

“The problem that came with them is that, if we were to allow those to be on campus, we are saying to people that use them, ‘These are safe. You will not get hurt. Go have fun.’ We would be endorsing them being on campus, and the school did not accept that liability,” Floyd said. “The liability would be the biggest issue with that. But, secondly, when you bring those onto campus, we are also inviting the public to come onto our campus to use them, or to drive into our campus like it’s a parking station for them, and because of that, I lose control over who can and can’t be on this campus. So Joe Meth-head comes wandering off the highway onto campus and he says he’s just looking at the scooters, I can’t tell Joe Meth-head to get out of here. He has a right, now, to be here because we invited him.”

Floyd said that the students never created a problem, and that the rules about not riding scooters on the sidewalk do not apply within the interior sidewalks of Newman because it is private property.

“If somebody wants to bring one from home and ride it on campus, that’s on them,” Floyd said. “We’ve had students with skateboards, students with rollerblades, we’ve had students that bike in. I don’t have a problem with that stuff, because that’s privately owned items, and they’re using them in a safe manner on this campus.”