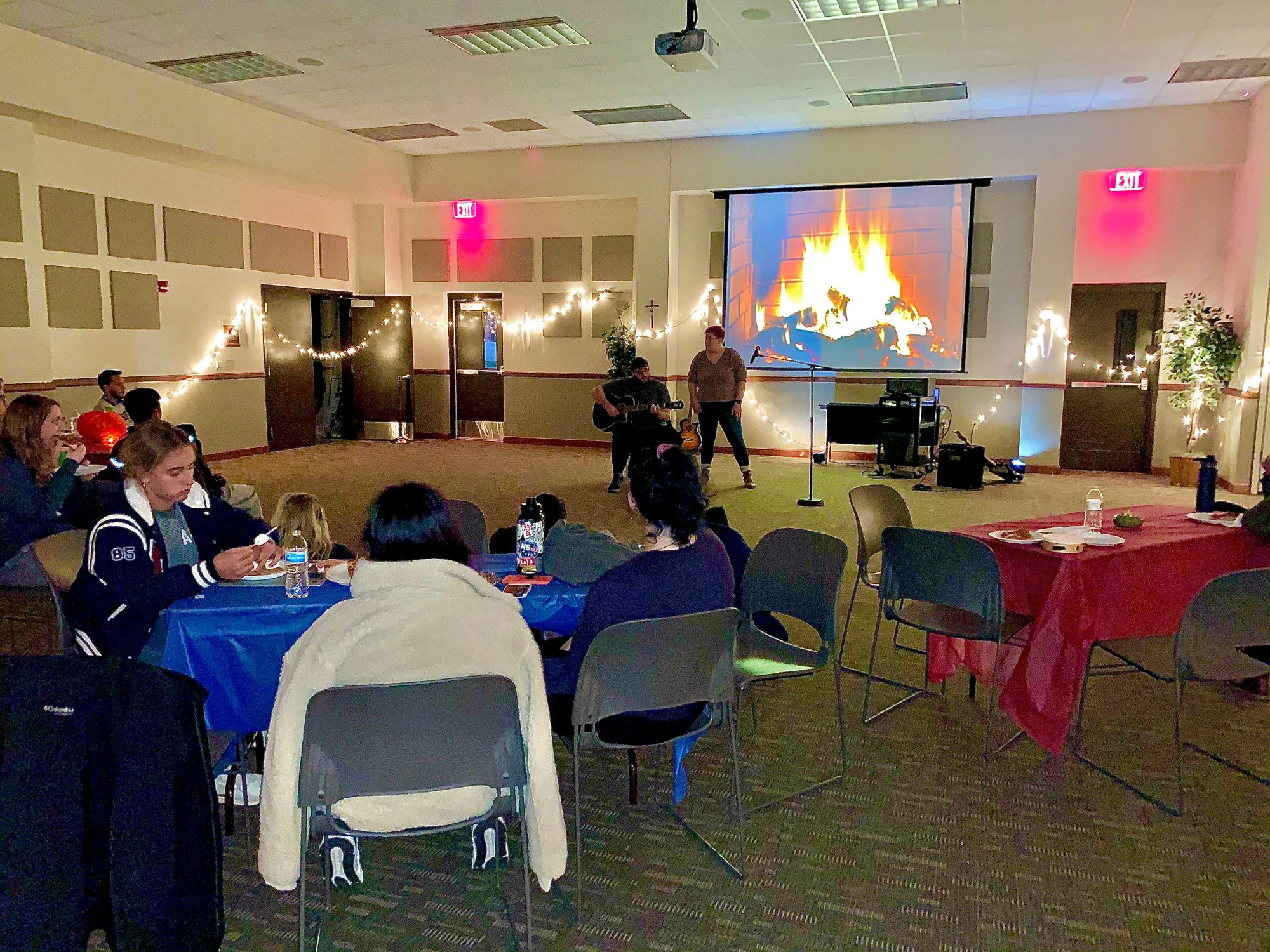 Bands and Bonfire gets even toastier after moving inside

Students gathered to listen to local musicians and enjoy a bonfire hosted by the Campus Activities Board, Bands and Bonfire.

Five bands in total played, with a finale by local band Re:Bound.

The event was originally planned to be held on Dresselhaus Patio with an actual fire pit where students could roast s’mores.

CAB Chair Katie Smith said the hope for the event was to showcase Newman and area talent with a fun, informal event.

The venue changed to Dugan-Gorges Conference Center last minute due to weather. However, students were still able to enjoy the bands of Bands and Bonfire.

Junior Stephania Lopez said she appreciated how CAB was able to transform the space.

In addition to fairy lights being hung around the room and dimmed lights, a bonfire was projected behind the musicians as they played. Students were still able to roast marshmallows over Sterno cans and make s’mores.

Steven Nguyen was one of many students who came for more than the free food.

One performer was Chauncey Toon, a former seminarian for the diocese.

“I’ve played at this event that friends and I have started to do every year, called Bubbafest,” Toon said. “But this will probably be my first public event away from friends.”

Chauncey said students that enjoy his music can find him on SoundCloud under the handle FinnaChauncey.

Freshman Talia Powers opened the event with “How Far I’ll Go,” sung karaoke and ended her set with “Oceans” by Hillsong.

Senior Kirsten Sanders sang while and her boyfriend on acoustic guitar played an original song they cowrote called “This Could Be Love.”

Toon followed the series of love songs with his own original, “Seems You’re the Right Girl,” which talks about falling in love with someone for a night, but they don’t feel the same way.

The final set of the night was performed by Re:Bound with Ian Collins on bass, and Newman students Jennifer Pham on acoustic guitar and Kayleigh Franco on lead vocals. They played their usual set they play around Wichita venues, ending with their only released song, “The Ride.”

Franco said that the band plans on releasing a full album soon in addition to appearing around town.

Nguyen thought the event was successful. “I enjoyed the different varieties of music,” he said. “Some were comical, like [Toon], and some made you think, like “Delusions” [by Re:Bound]... I just really liked the calm environment.”