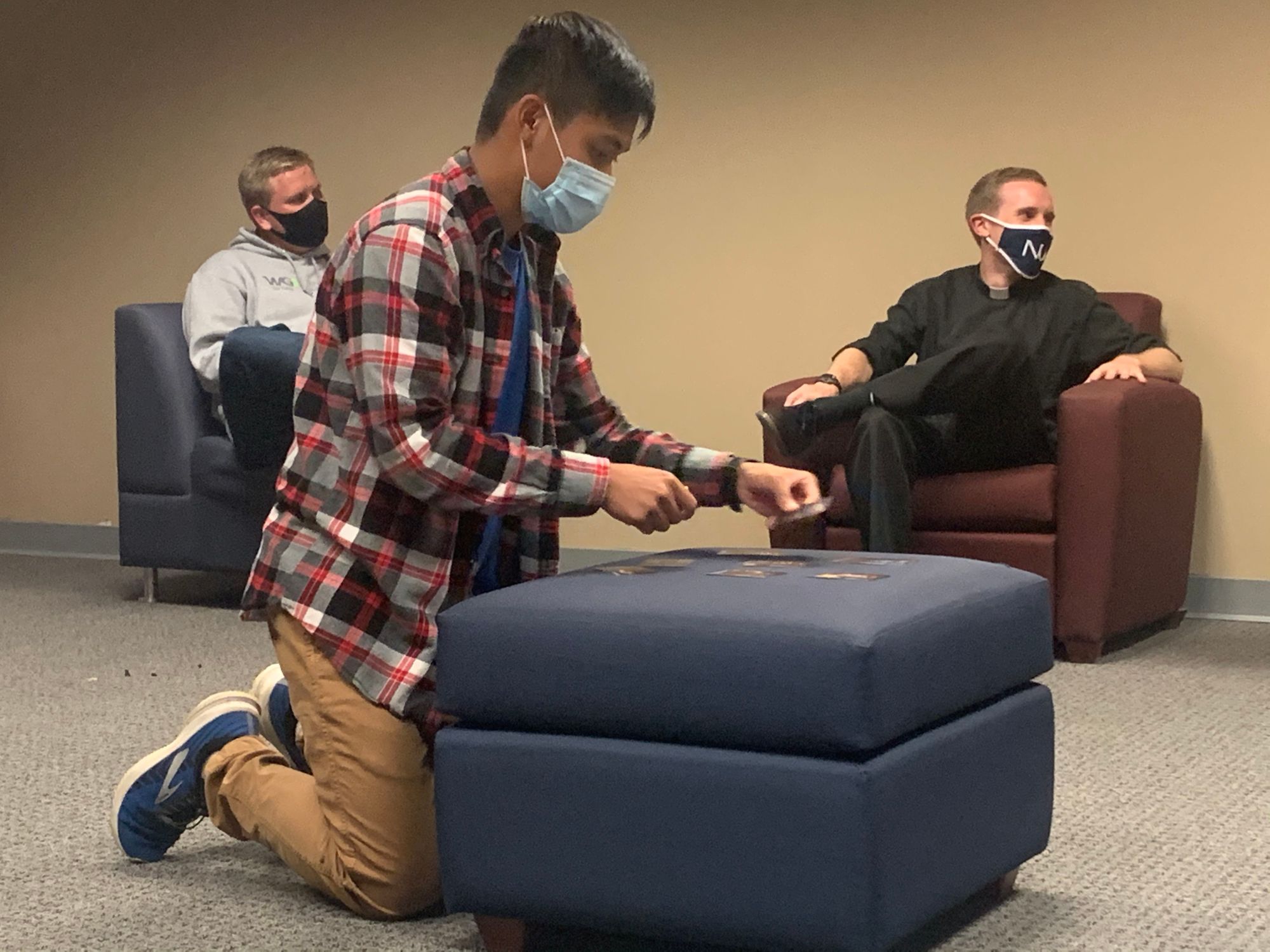 Campus Ministry gets a board and games

This hasn’t been a normal school year for anybody. So Father Adam Grelinger and Emily Simon, assistant director of Campus Ministry, said they thought, “What better time to experiment with a new format for Campus Ministry?”

“It just seemed like a really good year to change things up,” Fr. Grelinger said, “because things are weird this year, and so why not try to see what can happen.”

Campus Ministry is a group on campus that helps provide pastoral care for the Newman community. Fr. Grelinger is the director.

Steven Nguyen, who works for Campus Ministry, said that in past years, the group consisted of five or six people. Each of them was a paid student worker and had specific assignments.

“Someone would be assigned to do stuff for social media, others would set up liturgical music and schedules,” Nguyen said.

This year things are getting shaken up.

“[Now] we have two [paid] student workers who are in the office and working,” Nguyen said, “and then we also have our board that assists us. We have a treasurer, a president, a vice president... and then we consult the board for advice on ideas for future projects.”

Grelinger said that he’s excited about the larger number of students.

“[Now that] not all our students are working for the office, that allows some of them that were busy with other things and who couldn't even take the job to be involved and still have input and still contribute [by being] on the board, because it's just less time commitment,” Grelinger said.

Simon said that the board will help brainstorm and plan for Campus Ministry events.

“We really tried to grab students from different grades and different majors to try and get some variety together,” she said.

The idea was born over summer break, when Fr. Grelinger and Simon were on campus.

“We started thinking about it over the summer. We had a lot of time,” Simon said. “And so one of the things we did was make contact with some of the other campus ministries at colleges around the state, and…we were really impressed by their students’ involvement in campus ministry, and the fact that many of those students did most of the work and really considered campus ministry their own.”

Grelinger said that one of the main things they’re looking forward to is putting more of the decision making into the students’ hands.

“The hope is that by making it more of a student organization, putting it back in their hands, having a president, vice president, treasurer, giving them…a section of the budget they can work with, they can have more freedom to do what they want and not feel like they have to totally get our approval for everything,” Grelinger said. “Hopefully it will give them more initiative and freedom and space for creativity.”

And they have been getting creative, especially given the unique challenges that this semester has presented. Community is at the heart of Campus Ministry, but it’s hard to have community in the midst of a pandemic. Nguyen said that not only did they rethink the usual Campus Ministry activities, like board game night, they have also expanded with new activities, including the “Pandemic Olympics.”

“We thought of the idea of dividing the eight of us into groups of two, and each group is going out and getting people to join their team, and we're having the Pandemic Olympics,” Nguyen said. “We're doing small stuff like that, where we can be slightly competitive but also enjoy the community, a smaller sort of community, one that you can check up on throughout this uncertain time.”