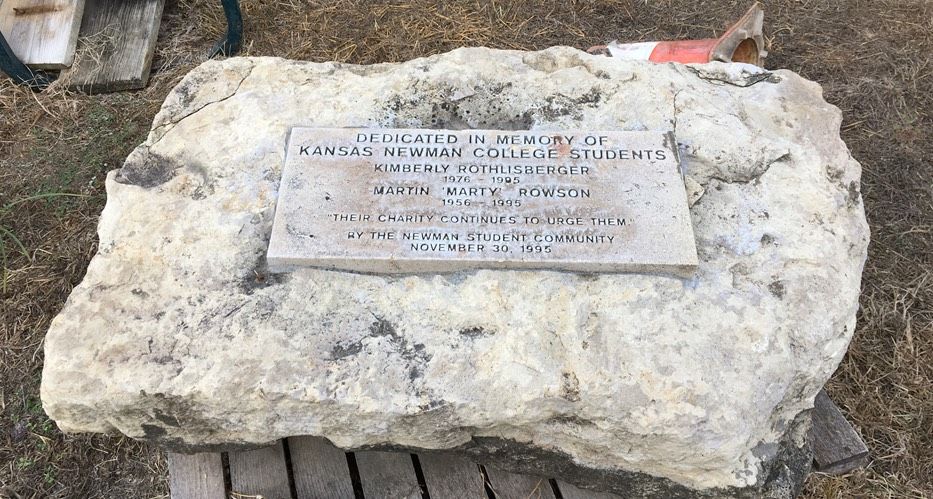 Memorial stone still not put back after construction

A memorial stone honoring the legacy of two Newman students who died in 1995 sits behind the maintenance building waiting for a new home on campus, though it seems unclear when that might happen.

The stone was removed from the area where the new Bishop Gerber Science Center sits now when the former building was demolished on June 16, 2017 to make way for its replacement.

The memorial stone, dedicated by SGA in 1995, was a tribute to students Kim Rothlisberger and Martin Rowson, who passed away within 21 days of each other.

According to issues of The Vantage from 1995, Martin Rowson, an elementary education major, died of lung cancer at the age of 38, and Kimberly Rothlisberger was killed by a reckless driver at the age of 19 while jogging with the rest of the women’s basketball team on West Harry Street. A ceremony was held Nov. 30 of that year in which a red sunset maple tree was also planted in their honor, and the memorial stone was placed by the tree. The tree also was removed during construction of the new science center.

Engraved on the memorial stone is the inscription, “Their charity continues to urge them,” a paraphrasing of the motto “The charity of Christ urges us,” then-SGA president Dan Giroux said at the time. Below the inscription appear the names of the students and the dates each of them died.

The memorial stone that commemorates Rothlisberger’s and Rowson’s legacy was supposed to be put back in a location close to the new science building once it was completed, but for one reason or another, it just has not gotten done, said Darrin McKim, Newman’s head groundskeeper.

McKim has been at Newman for 23 years, and he was in charge of removing and storing the memorial stone before the demolition of the old science building.

“It was in the footprint of the building, so it had to be removed,” he said. “But it needs to go back.”

Associate Vice President for Academic Affairs Rosemary Niedens arrived at Newman in 1999 when the death of the students was still fresh in people’s minds and hearts.

“It had been a very traumatic experience for the community as a whole,” she said.

Niedens said she doubts that very many people who are at Newman today know Rothlisberger’s and Rowson’s stories and that she would like to see the memorial stone put back in place because “people deserve to be remembered.”

She also said that it would be nice to have a ceremony when the stone is put back and bless the safety of all students on campus.

University Chaplain Father Adam Grelinger said he was unfamiliar with the story but expressed his willingness to do a rededication service, lead some prayers and bless the spot when the stone is put back as a way to keep Rothlisberger’s and Rowson’s memories alive.

Within four hours of the accident that killed Rothlisberger, a prayer service was put on in St. John’s Chapel, where “Father Massa, along with the campus peer ministers and administrators spoke with quivering voices,” according to the Vantage from Sept. 20, 1995.

“The way we respond and the way we continue to respond shows what kind of community we are,” Kim Miller, former vice president of student services, said during a prayer service on the day of Rothlisberger’s death in St. John’s Chapel, according to the Vantage.

More about the stories of Rothlisberger and Rowson can be found in the archives in Sacred Heart Hall.