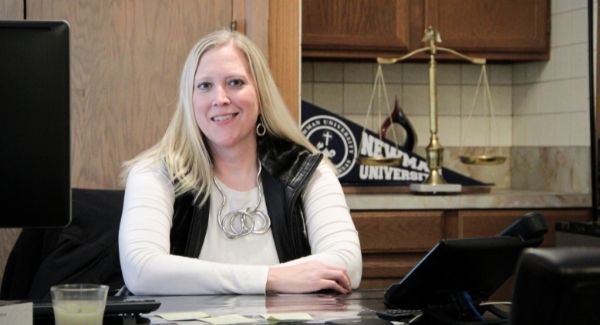 With the departures last year of Provost Kim Long, Director of Multicultural Engagement and Campus Life Joseph Shepard, Vice President of Enrollment Paul Carney and others, Newman has had plenty of open administrative positions this semester.

There have been multiple new hires to fill these positions such as Vanessa Rials, who filled Shepherd’s position of director of multicultural engagement and campus life.

Some key positions are still empty and being filled temporarily. Others have been filled by people promoted from within the ranks, creating new openings.

Newman President Kathleen Jagger said the search for a new Dean of Students is still underway. In the meantime, Schneikart-Luebee is filling both positions.

Jagger said that balancing both jobs is difficult but that Schneikart-Luebee is handling it gracefully with the help of the student life office.

“I think it’s very stressful, but I think she has done her best to try to meet the student needs from the Dean of Students office,” Jagger said. “I think both Chris Mershon (Director of Student Activities) and Vanessa Rials have really stepped up to take on a little bigger load while we’re finding the new Dean of Students.”

Employment Specialist Melissa Castle is currently leading the search for a new Dean of Students, Jagger said. They hope to make a hire by January.

“She’s been here for 16 years, so she has a great wealth of experience here at Newman,” Jagger said. “She is the dean of the school of business, so she understands the administrative level and can relate well to the other deans.”

Jagger said that the new hires throughout campus have done a great job of adapting to their new positions.

“There’s always a little bit of lag with people getting up to speed on their new positions, but they also bring new ideas, new energy and new enthusiasm to these positions,” she said. “But at the same time I think it infuses a lot of energy, talent, and great ideas.”

The Ty-Rade: Here’s my guide to ghosting

Like to argue? NU members want to start debate team