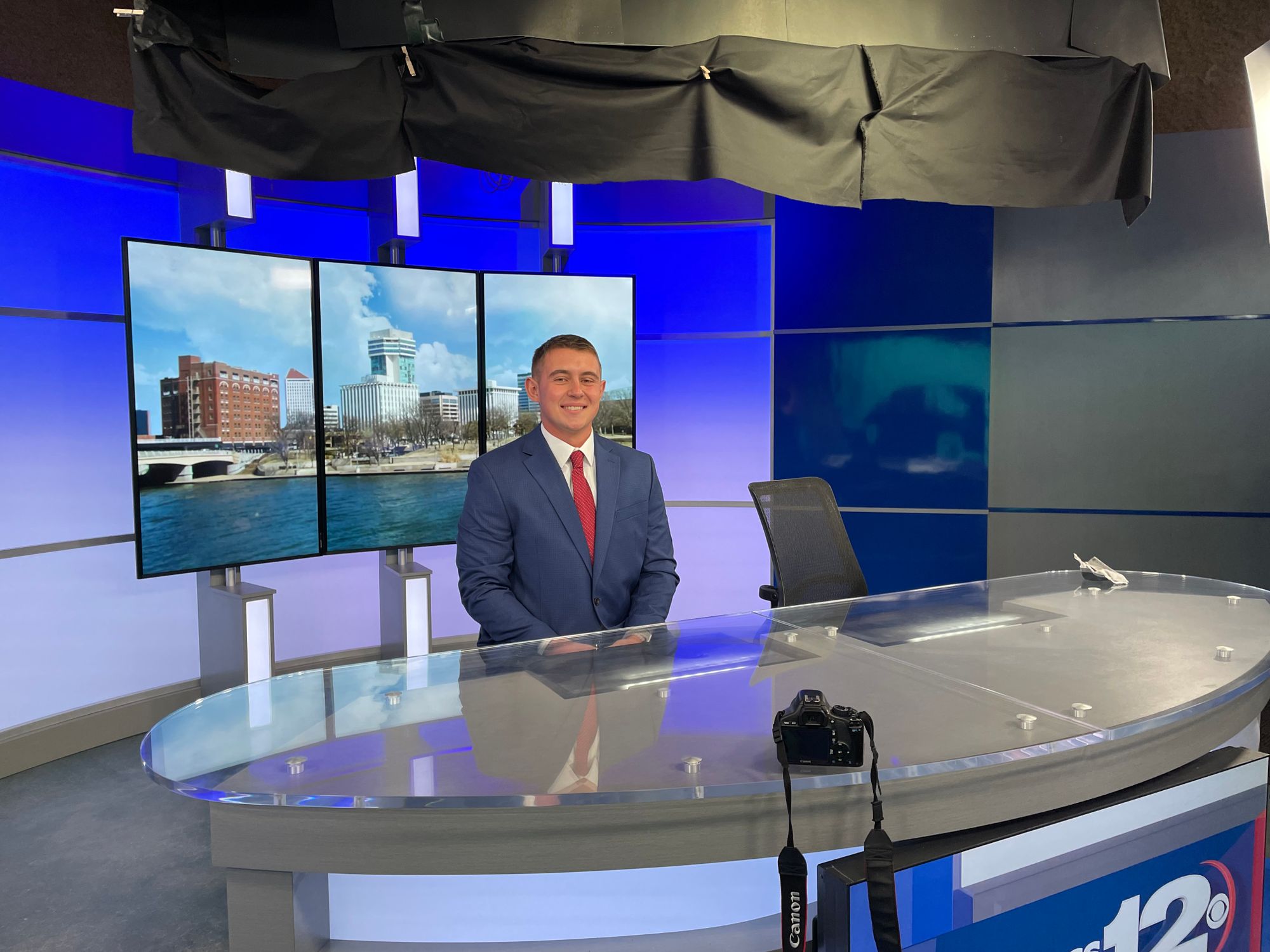 Members of the Newman community who tune into the 10 p.m. local news might soon see a familiar face. Tejay Cleland, a senior and the editor-in-chief of The Vantage, has recently been hired full-time by KWCH, Channel 12, to train as an on-air reporter. He’s working the job in the evenings while he finishes his final semester at Newman and continues to lead The Vantage.

Cleland will become a multimedia journalist, which means he will be a reporter in charge of shooting and editing his own videos. He started his training at the start of the new year and will be shooting a mixture of news and sports. Once his training is over, he will be conducting interviews, writing scripts, shooting videos, and going live, he said.

Cleland has been a part of The Vantage staff for two years. His first year, he was the sports editor, and this year, he is serving as editor-in-chief.

Cleland said he feels that his Newman experience not only prepared him but also helped him realize that TV journalism was a career he wanted to pursue.

“Working for The Vantage definitely gave me a light into what to expect in the field of journalism,” Cleland said.

The Vantage’s adviser and Wichita Eagle reporter Denise Neil, who also works as an adjunct professor of journalism at Newman, encouraged Cleland, who said he could not have acquired his new position on his own and attributes his knowledge to Neil.

“She definitely drew me into having an interest in reporting after taking Intro to Journalism freshman year,” he said. “She taught me everything about how to be a professional when reporting, how to write stories that people want to read, and lots of other stuff as well.”

Neil expressed that she has always believed in Cleland’s potential.

“Tejay has always been a driven journalist who knew exactly what he wanted to do with his life, and I’m not surprised that a local station grabbed him,” she said. “It’s also further proof of what I always tell students: Having experience on your college newspaper impresses employers and shows them that you have not only writing skills but also work ethic.”

Cleland also attributes some of his experience to the internship he had last semester in the Newman Athletics department. During his internship, he made news package videos about the university’s sports teams.

“I got to report on a Newman alum who got the opportunity to play professional baseball in his hometown, a soccer player who overcame blood clots in her lungs, a pair of twins coming from Portugal to Wichita to play soccer together and more,” he said. “So just the opportunity to go out and interview and put together videos and put them out on social media was great for me.”

Cleland said he is excited to earn the work opportunity and stay in the Wichita area and tell stories about the city and rest of the state.

“Ever since I showed interest in the field of journalism, I was always told that I would probably have to start in a small market and do strictly news, but the opportunities Newman gave me allowed me to start in a decent-sized market and do a little bit of sports as well,” he said.

Intramurals start the semester with cornhole

Valentines Day is the most overrated holiday. Here's why

The new "Avatar: The Way of Water" is a must-watch