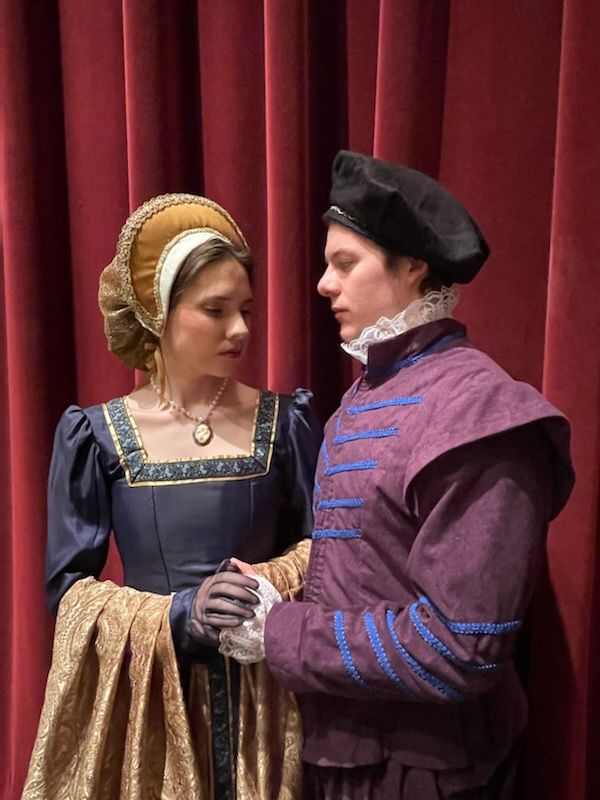 Newman’s spring play, “Mary, Queen of Scots” tells the story of the last days of Queen Mary of Scotland, which she spends exiled in England and awaiting execution. The performance, starring Allison Williams as Queen Mary Stuart and Rebekah Lipinski as Queen Elizabeth I, opens at 7:30 p.m. tonight in the Performance Hall in DeMattias Hall.

Director of Theatre Mark Mannette said that “Mary, Queen of Scots” is an adaptation of the play “Mary Stuart” by Friedrich Schiller. Mannette said he updated the language of the script in some places and trimmed the run time down considerably.

Having been a fan of Schiller for a long time, Mannette said, he has always been drawn to the story because of the powerful figures of the two main characters, Queen Mary Stuart and Queen Elizabeth I, who were cousins.

“I think that Mary has kind of a sad, tragic story and she makes a really interesting contrast to Elizabeth,” Mannette said. “Elizabeth never married, never had any children, and Mary was married three times, and … did have a kid who became the next monarch of England.”

Mannette said that Schiller wrote a scene where the queens confront each other, even though the two probably never met in real life.

“It’s really fun to have the showdown of these two powerful queens,” he said.

Senior Allison Williams, a psychology and criminal justice double major and theatre minor, plays the role of Queen Mary. She has been involved in every musical and play put on during her four years at Newman, coming to a total of 16 shows. This is her biggest role so far, and she has had to memorize nearly 650 lines.

Williams said that something she hopes a lesson that a modern audience can take away from the play is  the importance of being more understanding towards others.

“The big thing that I see in this play is that Mary and Elizabeth are very similar, and they want the same things,” Williams said. “Both of themjust want the conflict between Catholics and Protestants to stop. They just want the conflict between England and Scotland to stop. So they both want the same thing ... And just because of the situations that both of them were in, they had to go about their goals in different ways, and they were influenced by different people.”

She said it was not unusual for a queen to rule in those days, but it was unprecedented for two queens to be ruling the sister nations of England and Scotland at the same time.

“And so then, of course, their advisory councils were mostly made up of men who tried to still get what they wanted,” Williams said. “Both of them were honestly just controlled by the men in their lives, and nothing that they did was really what they would have done… And so I think part of it is just recognizing the influences in your life and trying to separate those from what you actually think.”

“Mary, Queen of Scots,” will show at 7:30 p.m. tonight through Saturday and at 2 p.m. on Sunday. General admission is $15, and the price for Faculty, Staff, Military or Seniors is $10. Student tickets are $5, and NU students can get in free. To buy tickets, visit: onthestage.tickets/show/newman-university, or buy them at the door.

Newman students listen in on discussion with Pope Francis

Worth the hype: I got hooked on the 'Euphoria' high