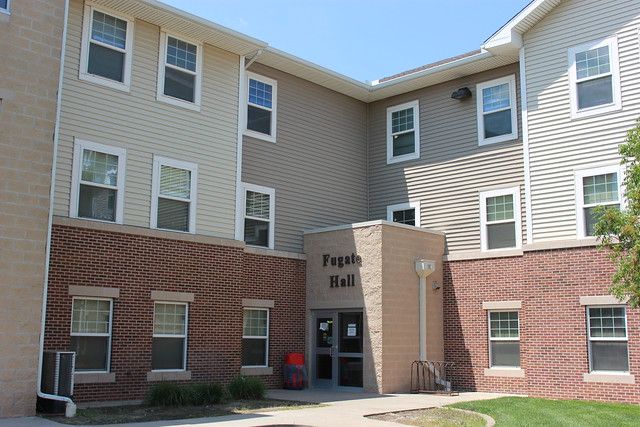 Fugate residents who have found driving into the residence hall’s parking lot these past few weeks a smoother experience have a Newman alumnus and a Wichita community member to thank.

Ray Dondlinger, vice president of Dondlinger Construction in Wichita and a 2005 graduate of Newman, and Chris Bergkamp of Bob Bergkamp construction, recently  donated a new paved entrance to the Fugate dorm parking lot.

The Fugate parking lot is partially paved, but the entrance and half of the lot were  gravel. The gravel portion of the lot has suffered structural issues over the years and has never been paved, but Sister Therese Wetta, Newman’s director of mission effectiveness, said that Newman has always tried to do its best to repair it.

“The university has used rock in response, but rain from the gutters flows that way and often washed some away, and cars driving through it would add to the displacement,” Wetta said.

Student complaints over the state of the entrance increased over the past year, so Newman set out to find a way to get it paved. Wetta said that because of a tight budget, the university knew it would need to find a company willing to donate the time and materials.

“Contact was made with a couple of companies at the beginning of summer, and calls were ignored,” Wetta said. “From the very beginning, this was a project that would depend on the generosity of the companies that did the work.”

The new entrance was put in over a several-day period in mid September, and dorm residents have been able to enjoy a smoother ride for their vehicles. While the new entrance is a step forward, Newman has no immediate plans to pave the rest of the lot, said Residence Life Director Mendel Folefac.

Wetta said students have already shown their gratitude by signing cards for the crews that helped put the new entrance in and that the university will be offering the companies a gift-in-kind to thank them for their donation.

Wichita full of haunted houses and scary fun for Halloween